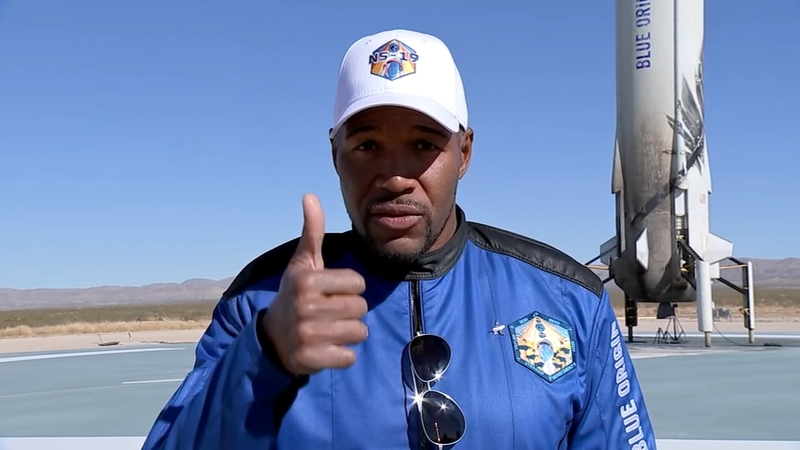 HOUSTON, Texas (KTRK) -- Should we call him Astronaut Strahan, now?

While Strahan, a Houston native and Texas Southern University alum, was inching toward the edge of space, a lucky TSU student and professor were there to watch.

Angel Mata, a senior at TSU, and aviation professor Ed Pataky were both on hand to see the magical moment.

"I'm just completely blown away," Pataky said before the launch. "I grew up with the space program. Never saw a launch, and now I get to do it."

ABC13 caught up with the pair after the launch, and it's safe to say, they were just as blown away as they were before the launch happened.

"All you can say is wow," Pataky gushed. "I'm just now coming back down to earth. There's no way to describe it. You have to be there. I was just absolutely awestruck. I've seen it on TV a million times, seen millions of pictures of it, but there's nothing like actually seeing it in person."

"What really hit me is when the booster was coming down and that really starts to reverberate between the mountains out over here," Pataky continued. "It didn't just go 'boom, boom.' It just kind of rumbled away. It was something you've got to experience."

Once Strahan was back on earth, he stopped to chat with Pataky and had a message for TSU students.


Strahan continued, calling it the "most magnificent" experience of his life, adding that the experience was possible because of the bright minds at institutions like TSU.

"You also realize it's created by smart people like the students at TSU, who may never get a chance to go, but their ingenuity, their education, their ability to figure things out, makes what we just did hopefully accessible to more people in the future," Strahan said.

You can view Strahan's full remarks in the video player above.

Texas Southern University is the only institution in the state that offers a four-year Aviation degree. At least 80 students are enrolled in the program.

"If you think about it, in some of these neighborhoods in Houston, you're never going to get an opportunity to speak to a pilot or an aircraft mechanic," explained TSU Director of Aviation Dr. Terence Fontaine.


Texas Southern is the only HBCU in the country with flight simulation programs.

Mata told ABC13 after Saturday's successful mission that knowing Strahan was onboard as a TSU alum only makes him more proud.
"It makes you feel proud about the legacy, you know, Michael Strahan and other alumni that graduated from Texas Southern. We're a family, so the camaraderie that we have, doesn't matter what year you graduate, we're always going to be there for each other, so it's fantastic to be here and see his achievement ," Mata said.

"It's a beautiful field, aviation. I've loved it all my life, so just trying to give back and try to help these kids realize something I've realized my whole life," Fontaine said. "For these kids to be able to talk to somebody like Michael, who walked the same hallway that he did, I think means a lot."

"All you can say is wow." This is how watching Michael Strahan on the Blue Origin mission added to TSU's incredible legacy.

When GMA host Michael Strahan blasts off on a Blue Origin rocket, one lucky student and one lucky professor from his alma mater will be there to watch.