Construction mistakes could have made Galleria-area traffic even worse 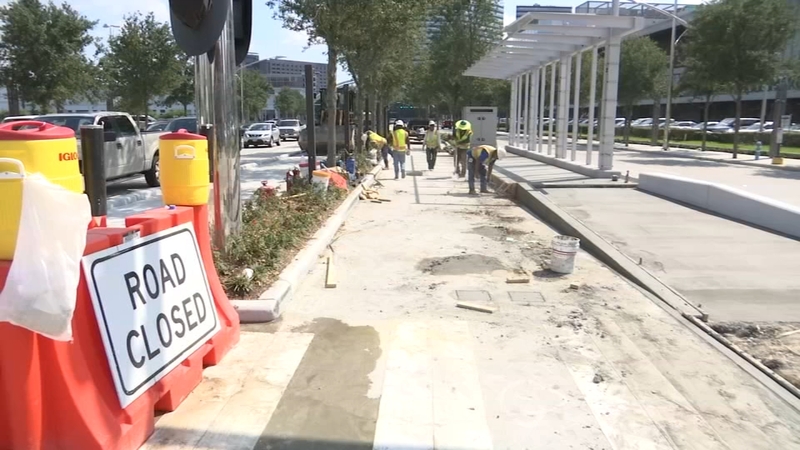 HOUSTON, Texas (KTRK) -- A recent review of a new rapid transit system in the Galleria area discovered crews made lanes too small and added light bars that would have injured riders and damaged buses.

After years and millions in the making, construction is supposed to be nearing its end for METRO's new system. But with the clock ticking, crews are suddenly racing to make changes.

"There's nothing I know now that would not meet that March 2020 (deadline), but if something comes up, and we don't think it's safe to operate, we will not operate," METRO Chief Executive Officer Tom Lambert explained.

Recently, something did come up. In a memo obtained by Eyewitness News, METRO, who isn't behind the construction, discovered two big problems.

"I'm pleased it was found," Lambert said. "I'm pleased Uptown is now making adjustments to correct that and we look forward to operating that service once it's completed."

The first was a light bar at the intersection of Post Oak Boulevard and Boulevard Place. At eight inches off the ground, METRO said it would damage buses and other vehicles that accidentally traveled in the lanes.

It was also discovered the width was a foot smaller in certain sections than city approved plans. This would reduce speeds, cause buses to hit the curbs and could possibly injure passengers.

The Uptown Development Authority District is behind the construction. The group said it removed the light bar.

It also explained to Eyewitness News it discovered less than one percent of the lanes were the incorrect width and it has fixed the problem. The cost of the project is nearly $200 million.

Uptown said the errors won't cost taxpayers any additional dollars. They said construction hasn't been delayed and the project should be completed by March.

As long as everything is safe, METRO said it can't wait for riders to experience its new form of transportation.

"We believe that Metro Rapid will be a great opportunity to help move people in a higher capacity area," Lambert said. "Get them to job centers, get people to education. It will help us move people in a much more efficient way."