Meteor captured on camera streaking across sky in Central Texas 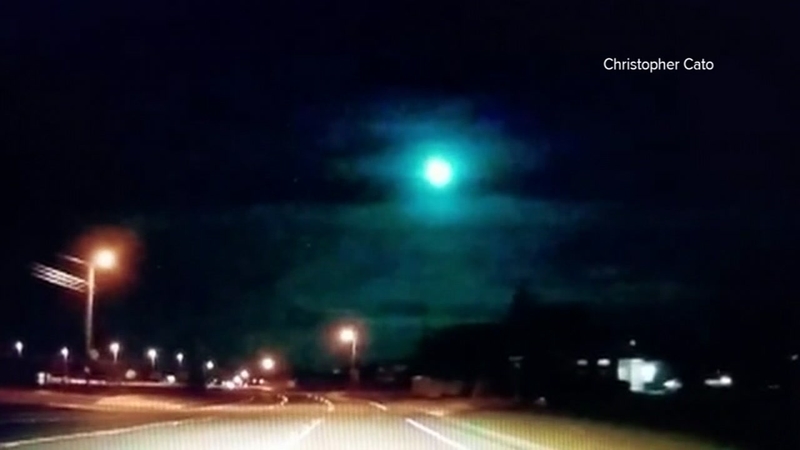 AUSTIN, Texas (KTRK) -- Texas is fully living up to shining "big and bright" after it appears a meteor streaked across the sky Thursday night.

In the Killeen area, video from Christopher Cato shows the burst of light caught on his dash camera as it traveled through the atmosphere.

Others in central Texas said they heard a loud boom.

One woman in Hempstead told ABC13 meteorologist Travis Herzog she spotted the blue flash, which bloomed into a turquoise jewel tone as it raced across the night sky.

Viewer Mary Ann Miron reported that she saw something unusual explode in the sky around 9:30 p.m. west of Highway 6 on FM 1736.

"A giant ball like a meteorite changed the rainbow spectrum of colors until it turned into a beautiful turquoise," Miron said. "I've seen shooting stars, but this was HUGE and colorful!"

Did you see or hear the bright fireball that exploded over Texas into a brilliant shade of turquoise last night?! Follow the link here to file a report with @amsmeteors and send me your pics/videos if you've got them!

On Facebook, user Perla Garcia posted footage from her dashcam of the object near Hopper and U.S. 59 in northeast Houston.

Flash in the sky spotted over US 59 in NE Houston (Courtesy: Perla Mora Garcia)

NASA defines a meteor as a bit of rock that breaks off from an asteroid orbiting the sun. It burns when it enters earth's atmosphere.

If part of the rock survives the trip through the atmosphere and hits the earth's surface, it becomes a meteorite.

Later Friday, the agency told ABC13 it received well over 100 eyewitness reports of the bright fireball occurring over central Texas at around 9:22 p.m.

It used the reports along with observatory and NASA camera footage to collect data on the object's movement, speed and location.

According to NASA, the data is consistent with the object coming from the North Taurid meteor shower. The agency also found that a fragment from Comet Encke may have sent the object to earth.

Did you spot the meteor burning across the sky on Thursday?

If so, you can report fireballs here to the American Meteor Society.

Several reports have already been filed on the site from people in Sealy, Katy and Houston.

The AMS created a trajectory map of the streak. Experts say the fireball ended its flight somewhere southeast of Johnson City.

You can also share photos with ABC13 on social media by using the hashtag #ABC13Eyewitness.