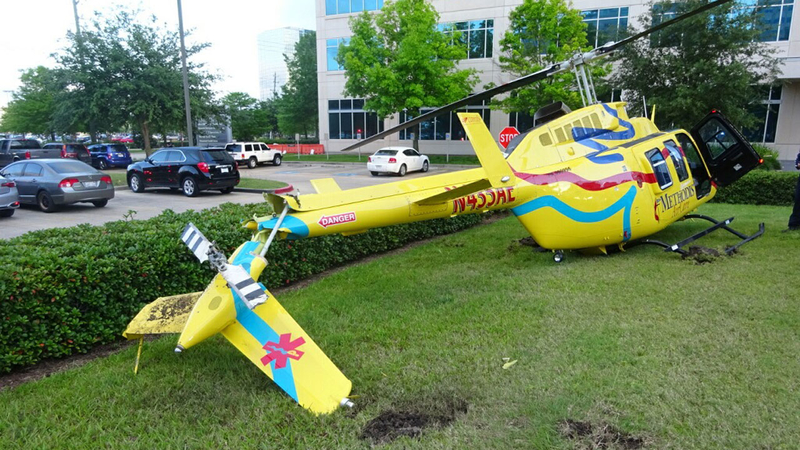 HOUSTON (KTRK) -- A chopper had a close call at Memorial Hermann Hospital in Memorial City Monday evening -- a frightening experience for the crew of a medical helicopter when it began spinning out of control.

Authorities are calling it a hard landing.

"It landed perfectly fine and sat for a moment," says eyewitness Jessica Brown.

But Brown says after a few minutes, this helicopter shot back up into the air. She estimates it got about to the top of the building but hovered over the helipad.

"When it got a little bit high and it just started going in circles. And it rotated probably five, six, seven times," she said.

She tells us she thought the chopper was doing tricks.

"And I thought that's really odd for the hospital helicopter to be doing tricks. Then when it hit the ground we were like, 'Oh my gosh! What happened?' We were hoping that nobody was in it, that nobody got hurt," she said.

Three people were on board: the pilot, a paramedic and a nurse. This was a Methodist Air Care chopper based in Seguin. It's operated by Air Evac Lifeteam in O'Fallon, Missouri.

A spokesperson tells us they'd dropped off a patient. The pilot went to refuel at Sugar Land Regional Airport and came back to get the crew. This hard landing happened as they were leaving to head home. All three were able to walk away without injuries.

A hospital spokesperson issued a statement that reads in part: "At this time, we are cooperating with appropriate authorities regarding an on-site investigation and will be working quickly to safely re-open our Memorial City helipad. In the meantime, all patient flights will be re-directed to other Memorial Hermann hospitals."
Related topics:
houstonhelicopteraviation
Copyright © 2022 KTRK-TV. All Rights Reserved.
TOP STORIES
Man dead after being shot during road rage incident, HCSO says
Murder suspect dead after found unresponsive in cell, sheriff says
Child hospitalized after found 'unresponsive' at Splashtown
Your chance of rain is going up this weekend
Authorities search ends for man with felony warrant out for his arrest
Driver shot during attempted robbery on Gulf Freeway feeder, HPD say
Suspect in intersection takeover arrested after 55-mile chase
Show More
First formula flights from Europe to arrive this weekend
Coast Guard suspends search for Houston woman off Alaska coast
Russia's claim of Mariupol's capture fuels concern for POWs
Some peanut butter recalled for potential salmonella
Child left alone starts E. Houston apartment fire
More TOP STORIES News