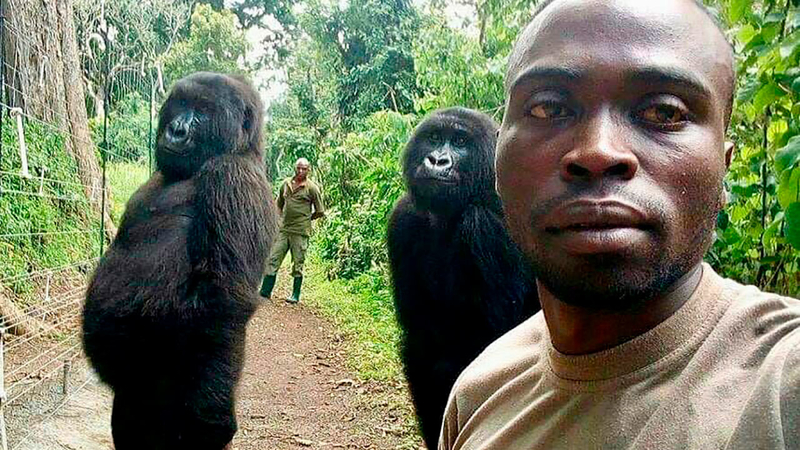 VIRUNGA NATIONAL PARK, Congo -- Move over, Kim Kardashian: there's a new queen of selfies -- two of them, in fact.

The internet is fawning over a selfie featuring two gorillas, Ndakazi and Ndeze, and Mathieu Shamavu, a ranger at Virunga National Park in eastern Congo. Shamavu told the Associated Press that he was checking his phone when the two gorillas began to mimic his movements, so he took a picture with them.

"The photo was taken while I was following these gorillas as we are trying to take them to their natural environment from time to time," Shamavu explained. "All primates have the habit of standing up and even marching for a few seconds...so I was paying attention with my mobile and when I saw them doing these movements."

Virunga's management hopes the selfie will help boost the park's profile and encourage more people to contribute to the vital work of conserving the mountain gorillas and their unique natural habitat.

Ndakazi and Ndeze were orphaned 12 years ago when their families were killed by poachers. They were the first orphans to be cared for at the center, which according to Virunga park's management, is the only place in the world dedicated to the care of orphaned mountain gorillas.

"When they see us, they feel to be safe...they can't think about their family, their family members in the forest. They know we are...a member of the family. We are their friend," fellow Virunga ranger Andre Bauma said.

The mountain gorilla is classified as an endangered species by the International Union for the Conservation of Nature. The organization estimates that there are only 600 mature individuals left in the wild, though researchers say their numbers are increasing.