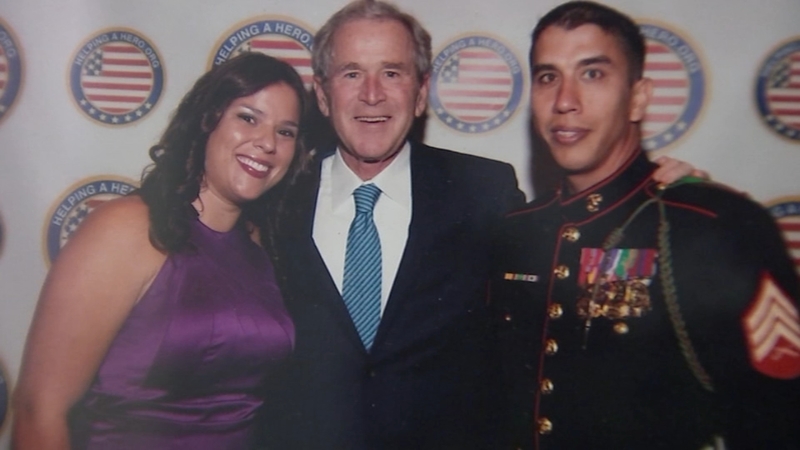 HOUSTON, Texas (KTRK) -- A Marine veteran and Houston native has died due to injuries sustained more than a decade ago during the Iraq War.

Sgt. Marty Gonzalez, 40, died suddenly on Saturday after his wife found him unresponsive in the driveway of their Cypress home.

"I never ever thought that at the age of 37 that I would be a widow," said Tawnee Gonzalez.

On a chilly December night, Gonzalez sits shattered inside but poised and warmed by her late husband's hooded sweatshirt.

"My children don't have their father," Gonzalez said.

According to the medical examiners office, Gonzalez died due to a blood clot in his lungs. It stemmed from complications following injuries he sustained during his tour in Iraq.

That tour in 2004 put him in the city of Fallujah where he and his squad would endure a number of deadly battles. Gonzalez survived two grenade explosions that left him wounded but he continued to fight.

Marty's tour-ending injury was a bullet to his arm. He came back to the states severely wounded and with his back broken.

"He hated the word hero," his wife Tawnee said. "Because he lived with the guilt of the man that he lost and he never fully forgave himself for the ones he couldn't bring back. But he was a hero."

From 2004 to 2013 Gonzalez underwent more than 15 surgeries. After what would be his final back surgery in 2013, he was left paralyzed. For years he lived in pain and agony.

She goes on to describe a close call they had last year. Gonzalez was sick in the ICU fighting for his life. Doctors had discovered blood clots.

"I actually had to bring my children to have them possibly say goodbye."

Gonzalez fought his way back to survivable health.

Last week he celebrated Thanksgiving with his family. Friday they put up their family Christmas tree. Gonzalez hung his favorite ornament: a crimson red ball, with a Marine Corps symbol.

Saturday morning was the usual routine with his family.

"We woke up and we had a great morning with our kids," his wife told ABC13.

She says she left for about 10 minutes in the afternoon to run a quick errand.

"And I came home and I found him unresponsive in our driveway."

Marty died in his driveway.

"Today the medical examiner called me and told me that my husband's death was a direct result of his injuries that he sustained on December 12, 2004 from the blast in Iraq," said Tawnee Gonzalez.