Woman begged for her life after being stabbed several times by 19-year-old, prosecutors say 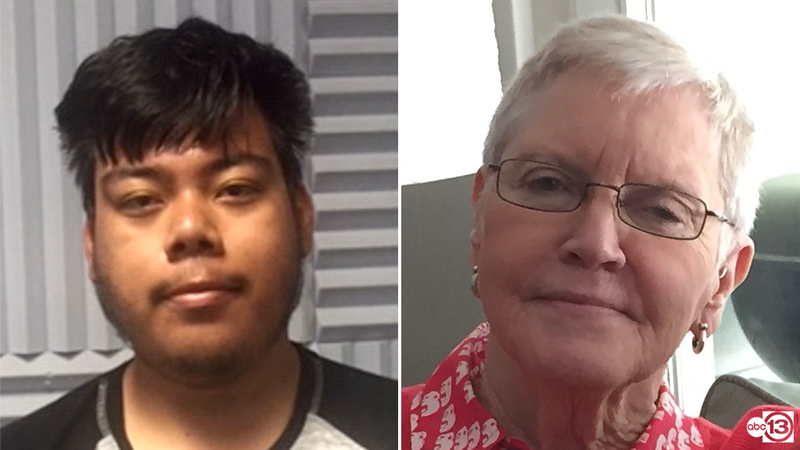 HOUSTON, Texas (KTRK) -- There are disturbing new details in the case of a 19-year-old who police say confessed to killing a 75-year-old woman in her southwest Houston home.

Police said Marco Cobos admitted that he stabbed Etta Nugent to death, stole her money to go to the store and returned to eat while she was dead. He told police that she even pleaded for her life.

Investigators said Cobos had been sleeping in a stolen truck in the area of the 8100 block of Neff Street for at least two days prior to the stabbing.

Cobos told police he was having issues with his vehicle and asked Nugent to help him. Police said that Cobos then forced his way into her home sometime Sunday night and stabbed her in the chest when she told him she couldn't help.

According to details revealed in court, the initial stabbing did not kill her so he went to the kitchen to look for other knives.

Cobos told investigators that when he was in the kitchen, he heard the front door and saw Nugent trying to escape, reaching as far as the front porch. He said he grabbed her in a bear hug and stabbed her several more times until she died.

Cobos also told police that he talked to her as she pleaded for her life.

Nugent's son had gone to the house to check on his mom and found her body in the living room.

"I took her chicken noodle soup, 7 o'clock Sunday night," said Sharon Shanahan, a neighbor for more than 30 years. "They think it happened shortly after that."

Shanahan and other neighbors say Nugent and her husband are pillars of the community. They were dedicated to their church across the street and took pride in their Sharpstown neighborhood.

"A gentle soul, good Christian woman. Always will do whatever for the neighborhood," said Shanahan.

Law enforcement sources told ABC13 that sometime after stabbing her, Cobos took $560 and drove the victim's Honda Accord to the store so he could buy food for himself and a new battery for the pickup.

Cobos returned to Nugent's home, where he ate his food and hung out for several hours, sources added. He also apparently used Nugent's credit card to pay his cell phone bill.

At some point on Monday, Cobos left the home once more. As of this moment, it's unclear whether he used the pickup or the Honda again.

Nugent's husband has been recovering from an illness at an assisted living facility and was not home at the time.

"Just devastated is what comes to mind," said Council Member Mike Laster, who represents Sharpstown and has known the Nugent family for years. "Evil exists. It happens. And we are all our brother's keepers and we all need to keep an eye on each other and keep an eye on the area."