Catalytic converter theft suspect shot and killed by Sugar Land police, 3 others got away 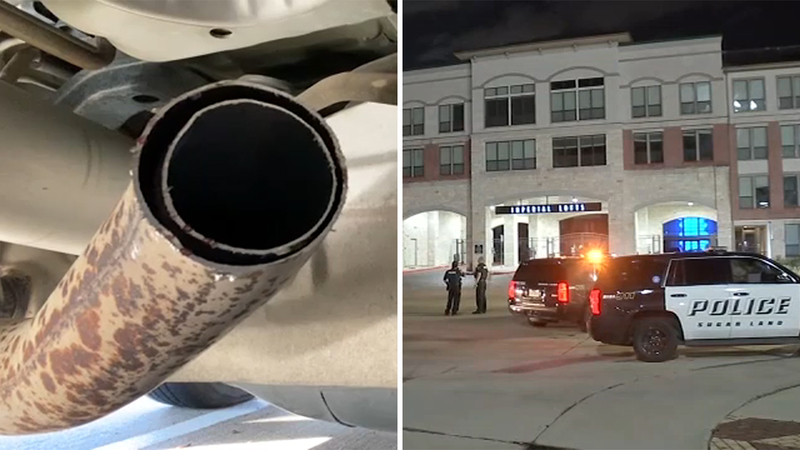 SUGAR LAND, Texas (KTRK) -- Sugar Land police say a suspected catalytic converter thief was shot and killed by an officer after allegedly pulling out a gun as they were trying to take him into custody.

The search for three more suspects continued on Friday.

Sugar Land police said it all started just after 10 p.m. Thursday near the Imperial Lofts apartment complex and Constellation Field at Highway 90 and Stadium Drive.

Officers got a call from someone who said they saw catalytic converters being stolen at the apartment complex.

The police department said officers were already close by when the call came in.

The officers got behind the suspect vehicle, and police said that's when the suspects led them on a short chase before stopping and running off into a field.

A couple of the suspects jumped into the bayou, Sugar Land police said.

It was in the field where authorities say one of the suspects pulled out a gun. That's when an officer shot him.

"One of our officers had our drone up in the air and was tracking the suspect as he ran through the field. Several officers were in the field," Assistant Chief James Davis said. "As a perimeter was set up, the suspect produced a weapon and the officer returned fire, shooting the suspect."

That suspect was taken by Life Flight to Memorial Hermann, where he was pronounced dead.

None of the officers were injured.

Investigators believe there are four suspects in total. Now, the search for the remaining three continues.

Police said they recovered the suspect's gun at the scene. Investigators said it is unclear if the suspect actually fired the weapon or not -- that is all part of the investigation.

Sugar Land police said they are working with the Texas Rangers and the Fort Bend County District Attorney's Office on the investigation.

Maurice Caraway, who lives at the Imperial Lofts, told ABC13 he woke up to a note on his SUV to call Sugar Land Police. His was one of at least three vehicles targeted by the catalytic converter thieves.

"It didn't sound like that before," Caraway said as he started his SUV. "This is going to be an expensive and costly repair."

Ray Chapa, who also lives at Imperial Lofts, had his catalytic converter stolen at his office in Sugar Land just a few weeks ago.

"I ran downstairs and was just hoping and praying that my truck didn't get hit again," Chapa said.

He said he is thankful his truck wasn't targeted this time.

"The crime for this is really going up, and hopefully, it stops soon," Chapa said.

As for the other three suspects officers are still looking for, police said they didn't get a good description of them.

If you see anything or know anything, you are asked to call police.

Sugar Land police say a suspected catalytic converter thief was shot and killed by an officer after allegedly pulling out a gun as they were trying to take him into custody. We have a full report coming up at 11 on @abc13houston.https://t.co/hb9pKfkhVe