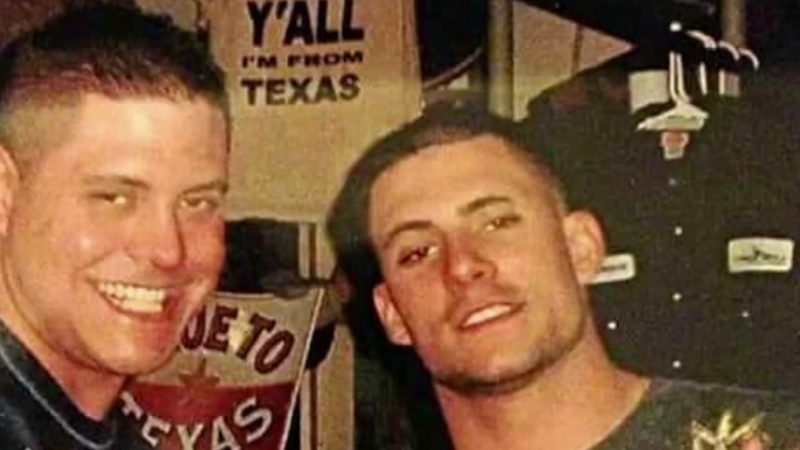 TOMBALL, Texas (KTRK) -- A man was found dead in a Tomball neighborhood after allegedly shooting his wife and son, police say.

Officers arrived to a home on the corner of McPhail and South Walnut streets around 10 p.m. Thursday after several neighbors called 911 saying they had heard shots fired.

Harris County SWAT officers surrounded the home and discovered the father's body in the front yard.

James identified his father as Jeril Jacobson. He was in his early 50s.

James Jacobson (left) says his older brother Chris (right) is up and talking—despite the fact he was shot at least 4x by their father. Their mother Kathy was also shot. She’s recovering too. Update on #abc13 @ 11. https://t.co/aN8sxTucR0 pic.twitter.com/NYJuZi646f

James arrived at the house where he grew up about an hour after police left. He said he heard about the shooting on Facebook.

James was not at the home when the shooting happened. James said his mother, father and older brother, Chris, had been fighting a lot in the past year.

"My father may have been depressed and not very social," James said. "My brother and dad, they just clashed a lot."

Police have not said what led up to the shooting.

After he was shot, Chris Jacobson, 33, ran across the street to Michael Baker's house to get help.

"When he fell into my arms, Chris said, 'I'm shot! Dad shot me! I'm not going to make it!'," Baker told Eyewitness News.

Baker said Chris was bleeding profusely from his leg and stomach. Baker cinched a leather belt around Chris's leg. Baker, a Navy veteran, knew how to use a tourniquet thanks to his 11 years as a hospital corpsman.

Meanwhile, Baker recalls Chris' mother Kathy, who had been reportedly shot once, crouching under a pick-up parked in the street, yelling she had been shot.

Kathy was taken to the hospital by ambulance and immediately underwent surgery. She's recovering.

Chris was flown to the hospital. James says he's conscious and also recovering.

Police have not confirmed if Jeril shot himself or if he was shot by someone else.

"Whoever thinks a father is going to shoot his son?" Baker said. "This happens other places, in other communities. Not here, Not our neighbors."
Report a correction or typo
Related topics:
tomballwoman shotdeadly shootingshootingman killedman shot
Copyright © 2021 KTRK-TV. All Rights Reserved.
More Videos
From CNN Newsource affiliates
TOP STORIES