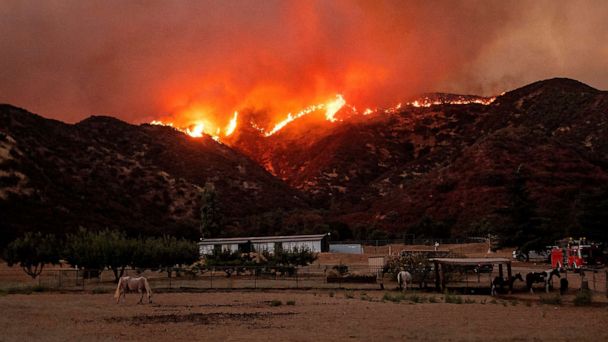 A malfunctioning automobile exhaust appears to be the cause of the massive Apple Fire that has scorched 26,450 acres in Riverside County, California, and was only 5% contained as of Monday morning.

The blaze, which has destroyed at least one home and two outbuildings, began shortly before 5 p.m. local time on Friday in the Cherry Valley area.


No injuries have been reported, according to the California Department of Forestry and Fire Protection.

Based on eyewitness accounts and supporting evidence, officials said they determined the cause of the fire to be a malfunctioning diesel-fueled car that had emitted burning carbon from its exhaust system.

Over 8,000 people were forced to evacuate their homes, which posed a particular challenge for families seeking a safe place to stay amid the ongoing coronavirus pandemic.

"We had a lot of trouble finding a place to stay last night, because of so many people being evacuated at the same time," Ket Sengchan told ABC News about evacuating with her young daughter. "Me and the baby kinda stayed in the car last night. I should be at home. I shouldn't have to be running the streets looking for somewhere to sleep."

Nearly 2,600 homes were affected by the evacuation orders, fire officials said, adding they do not have a time frame for repopulating evacuated areas, according to ABC News Los Angeles station KABC.


People at the evacuation center are subject to COVID-19 testing before entering, according to fire department spokesperson Fernando Herrera.

The American Red Cross was also assisting evacuees by temporarily housing them in hotels.

California Office of Emergency Services said FEMA approved a request from the Cal OES director and Gov. Gavin Newsom on Sunday for a Fire Management Assistance Grant for the Apple Fire. Officials said the approval "will ensure the availability of vital resources" for Riverside and San Bernardino Counties.

More than 2,200 firefighters were deployed to battle the flames both in the air and on the ground and crews dropped 19,000 gallons of flame retardant from helicopters on Saturday to help create containment lines and protect personnel on the ground, KABC reported. The northern and eastern edges of the fire are in steep, rugged hillsides not accessible to firefighting vehicles, officials said.