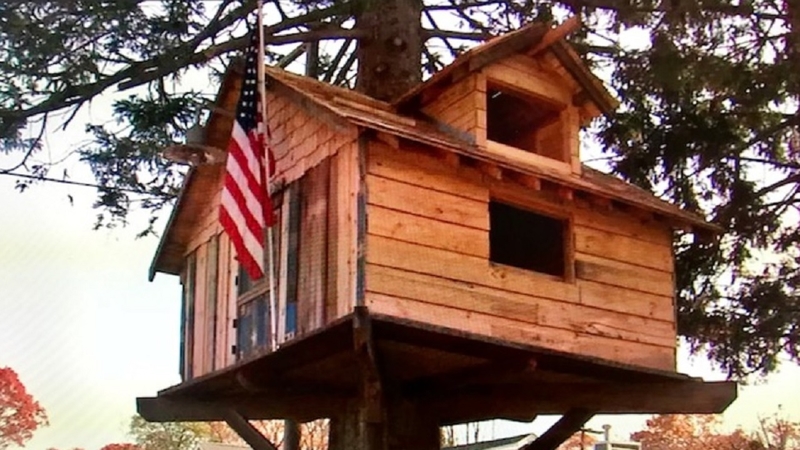 BABYLON, Long Island -- A father on Long Island who is building a tree house for his children is being told he has to stop working on the construction and take down the treehouse, or he will receive daily fines.

John Lepper began building the treehouse in his backyard in early May for his children -- Bayden, 6, and Brianna, 5.

He wanted to build the treehouse because he thought it would be a great birthday present for Bayden and, more seriously, because he had found a hypodermic needle in his bushes.

"I'm a father trying to protect my kids from what I found in my bushes. Keeping my kids safe in the backyard, I built them a treehouse," Lepper told Eyewitness News reporter Kristin Thorne.

Lepper, a FDNY firefighter, received a letter from the village building inspector on May 10, informing him that the structure may require a building permit. Village code states that any playground larger in size than 90 square feet requires a permit. Lepper said the tree house is 86 square feet, but he was willing to play along.

"On May 21st, I went down to the village, filled out the application for the permit, submitted a drawing, elevation drawing of the treehouse with a survey with the location of it," Lepper said. "The building department told me that it was acceptable with the application. Never heard back from the village until July 19th when I received one envelope with three summonses in it for construction of a treehouse without a permit."

According to court documents, the building inspector, Stephan Fellman, had returned to the property on July 11, 12 and 13 and observed the construction beyond the platform of the treehouse had taken place.

"I still don't know how I can be guilty of these three summonses, three consecutive days that were delivered in one envelope," Lepper said.

The village said Lepper's permit application is deemed incomplete as it did not contain a drawing from a licensed architect or engineer. The plans could cost Lepper thousands of dollars.

According to court documents, "(Lepper) does not and cannot dispute the overwhelming credible evidence that construction of a building in the form of a treehouse was undertaken without a valid permit having been issued on each the dates alleged by the People in violation of Babylon Village Code."

Most of Lepper's neighbors have no problem with the treehouse, but some do, including Bob Kinnear.

"I'm a little concerned as a neighbor just driving by and somebody falling out the treehouse and such. You know, it's kind of close to the street," Kinnear said.

Kinnear also said he admires Lepper's handy work and wishes him all the best.

Lepper said he had no plans to dismantle the treehouse and made that clear before a court appearance Tuesday.

"Only God's going to take this one down, and apparently I've been asking all the wrong people for help. I've been asking nicely to the village and all our elected officials around here. Now I'm going to ask the big guy," he said.

During Tuesday's court appearance, he pleaded not guilty to permit violations. The judge gave him until Nov. 20 to submit licensed architectural or engineering plans or he'll have to take it down.

Lepper is still deciding if he will appeal the case to the New York State Appeals Court. He has until Nov. 17 to make that decision.