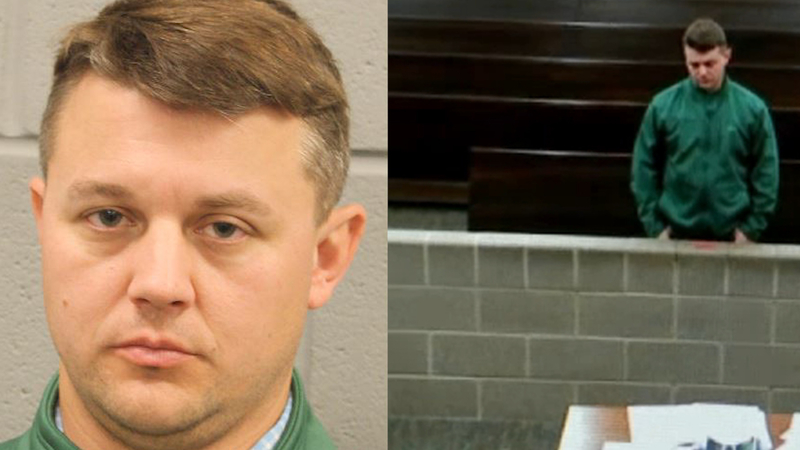 HOUSTON, Texas (KTRK) -- The Liberty County District Attorney has been arrested for assault in downtown Houston.

Logan Pickett, 38, was taken into custody Saturday morning at the Westin Houston Downtown hotel, according to Houston police.

Pickett's wife told the hotel front desk clerk that she and her husband were at an event at Minute Maid Park and went to dinner before returning to the hotel.

On Sunday, the couple released a joint statement through their lawyer, saying, in part, "They will not make any further comment regarding the matter pending in Harris County," and "Logan will continue to serve the fine folks of Liberty County in the discharge of his duties as District Attorney."

His wife said she found out after a Friday night dinner that Pickett had been having an affair for the past 15 months, according to police, causing an argument to begin.

That is when police say he pushed his wife, causing her to hit her head.

Medics on the scene determined she needed three stitches to close her wound, but police say she refused medical attention.

Pickett is charged with assault against a family member, a class A misdemeanor.

He was the last defendant to appear on the probable cause court docket.

All other defendants had left the hearing room. Before the charge against him was read, the judge noted that "elected officials are held to a higher standard."

Pickett was given pre-trial release on Saturday and his bond was set at $1000. The state had asked for double that amount.

In the conditions of his release was a protective order, requested not by his wife, but the prosecutor.

"You cannot have any threatening, harassing or violent contact with Mrs. Pickett," said the magistrate. "Your concealed handgun license will also be suspended while this case is pending."

Pickett was sworn in as the Liberty County District Attorney in 2013.

He graduated from South Texas College of Law in 2006, according to the Texas Bar Association.

Follow Deborah Wrigley on Facebook and Twitter.
Report a correction or typo
Related topics:
houstonarrestofficer arrestedassault
Copyright © 2022 KTRK-TV. All Rights Reserved.
TOP STORIES
Daylight shows home destroyed after standoff with shooting suspect
What we know about man accused of shooting 3 HPD officers
Suspect arrested after 30-minute chase ends on I-45 in Texas City
Clouds clearing today, sunny through the weekend with rain next week
5 people charged in connection with Pct. 5 corporal's murder
How many times can I reuse my N95 mask?
Decades after TV anchor disappears, convicted rapist denies connection
Show More
Driver dies after slamming into 18-wheeler's trailer on US-59
Woman shot in the shoulder during robbery set up in SW Houston
Prepare for a major closure at I-69 and 610 West Loop this weekend
Officers escort body of corporal killed in ambush to funeral home
ABC13 obtains HPD scanner traffic of chase that led to shootout
More TOP STORIES News