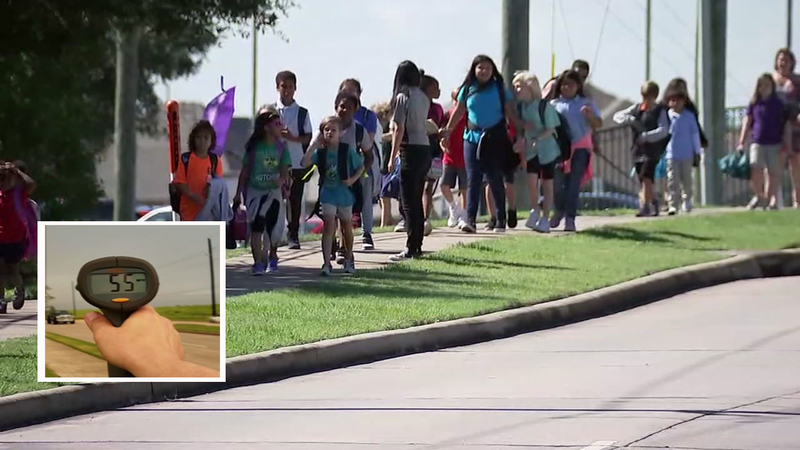 RICHMOND, Texas (KTRK) -- A Lamar Consolidated ISD parent is using a radar gun to clock how fast motorists speed by his child's school.

Cass Mattison said speed is an issue at Hutchinson Elementary School, which is located between Southwest Freeway and Highway 90.

During school zone hours, drivers are supposed to slow down to 20 miles per hour, but he couldn't believe it when he caught one person going 55 miles per hour.

"I was shocked," Mattison said. "I was like, 'Wow, that actually happened,' and he was on his cell phone."

To fix the problem, he's asked the sheriff's office for help, which is a few miles from the school.

"About 30 minutes of an officer's time," Mattison said. "You've probably seen 12, or 13 in the last 10 minutes. One could stop for five or 10 minutes and just make a presence here."

The sheriff's office said many deputies drive through the area to head to their districts. "And they don't just blow off the school zone," Sheriff Troy Nehls said.

"Since the first of the year, we've made over 200 traffic stops in that area," Nehls said. "To say that we're never there is a stretch."

Sheriff Nehls said they focus on school speeding in August, but there are more than 70 schools across the county, which he says makes it impossible to enforce throughout the year.

"What do you want me to do, have 70 guys on day shift? Want me to do that? We can't afford it," Sheriff Nehls said. "Quite honestly, I don't think it's necessary."

Sheriff Nehls said they do random enforcement throughout the year. They also work with other agencies.

That's not the only presence drivers see. Mattison hopes his radar, and videos will reach drivers to send a message to slow down.

"Imagine if it's his child and he's in my situation and we flop roles, and I was the one speeding on my phone and I hit his child or a friend of his," Mattison said.

School zone infractions can lead to higher fines. Cell phones are another issue in school zones. If caught, TxDOT said motorist face upwards of $200 in fines.