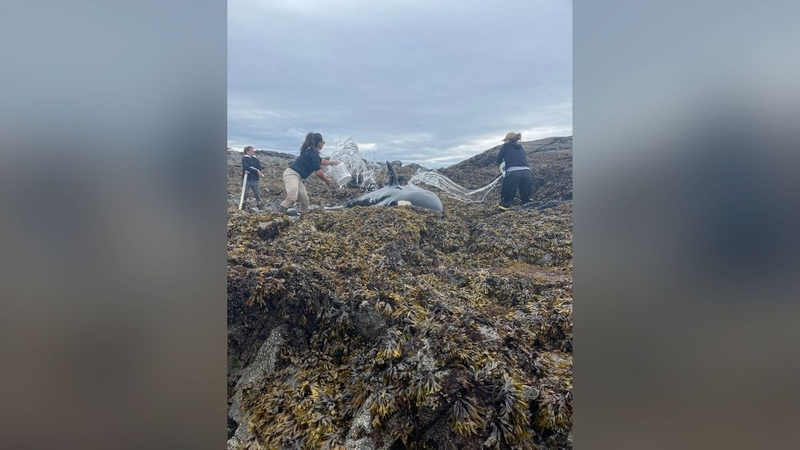 ALASKA -- An orca that became stranded on a rocky beach in Prince of Wales Island, Alaska, Thursday morning was freed with the help of the National Oceanic and Atmospheric Administration (NOAA) and sailors who happened to be nearby.

The stranded killer whale was first discovered on the rocks by a nearby vessel, the Steadfast, according to NOAA, who "authorized them to use a seawater pump to keep the whale wet and any birds away," NOAA spokesperson Julie Fair told CNN.

The boat crew kept an eye on the whale until a NOAA officer and Alaska Wildlife Troopers arrived.

"At times during the stranding, the killer whale was vocalizing and other killer whales were spotted in the vicinity," Fair said.

The orca finally refloated as high tide came in Thursday afternoon, according to NOAA. Bay Cetology, a Canadian conservation group, was able to determine it was a 13-year-old juvenile Bigg's killer whale they previously monitored and identified as T146D.

Fair said NOAA is examining photos and video of the killer whale to determine if it was injured. The animal was beached less than a day after an 8.2-magnitude earthquake hit off the coast of Alaska, but NOAA does not believe that caused the killer whale to become stranded.

A TikTok user who goes by the name Aroon Melane shared a video showing people helping keep the orca wet until NOAA arrived and said the whale was able to swim free once the tide returned.

"We heard there was a beached killer whale so we went to go find it. NOAA gave permission to keep the orca wet and protected from animals until they could arrive," Melane says in the video. "We were working on getting a hose and pump to work. In the meantime, we used buckets to keep the orca wet. The orca started getting more lively after we put water on it."

The killer whale was stuck for about six hours, she added.

This is not the first time a Bigg's killer whale became stuck on rocks, according to Bay Cetology.

"Our research on this specific topic published last year shows that all killer whales live stranded along the west coast of North America in the last 2 decades have been of the Bigg's ecotype and all of them survived, sometimes with a little help," the conservation group said.

Transient killer whales hunt sea lions, according to the Alaska Department Fish and Game. They can often find themselves live stranded "in pursuit of prey," a Bay Cetology research study said, adding that while human help isn't always needed, it can often save the lives of the killer whales as well as their family bonds.

It is unclear how the orca became stranded or whether it was hunting seals when it got stuck.