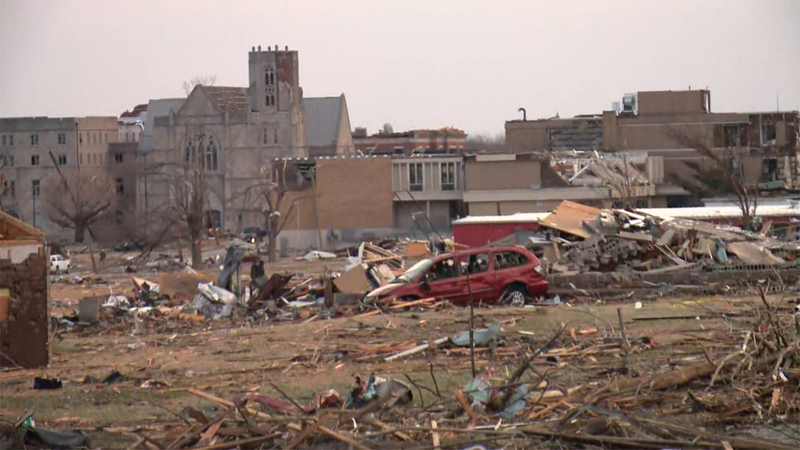 Over 70 dead as 18 reported tornadoes rip across South, Midwest

NEW ALBANY, Ind. -- A decades-old family photo from a home in Kentucky turned up more than 150 miles away in Indiana on Saturday after apparently being whipped up into the debris of deadly tornadoes that tore through the region.

"Walked out to my car in New Albany, Indiana and found this picture stuck to the window," Katie Posten wrote in a post on Facebook.

Walked out to my car in New Albany, IN and found this picture stuck to the window. Undoubtedly from a home that was struck by the tornado that ripped through Kentucky last night. Hoping to find its owners. It looks like it reads - Gertie Swatzell and JD Swatzell 1942 - pls RT pic.twitter.com/juoCYNAS3o

At first, Posten thought someone left a note on her windshield, but when she got closer, she realized it was a picture. The black and white photo, dated 1942, shows a woman in a striped dress holding a young child in her lap.

Severe storms raged across parts of the central and southern US overnight Friday into Saturday, decimating towns and neighborhoods in their path. Officials say up to 80 could be dead across several states, with Kentucky Gov. Andy Beshear saying more than 70 are feared dead in his state alone.

The back of the photo had handwritten names and a date. "It looks like it reads 'Gertie Swatzell and JD Swatzell, 1942'" Posten wrote in her Facebook post.

Posten told CNN she was tracking storm activity in her area and immediately thought the photo could be debris from storm damage in Kentucky. She said she couldn't see any other debris near her home. "No tree limbs, no shingles, nothing like that," she said, adding, "It's pretty remarkable."

Posten said she posted the photo on her social media accounts in hopes of finding its owners.

On Facebook, Posten was able to connect with Cole Swatzell from Dawson Springs, Kentucky, who said the photo belonged to his family.

Mercy Chefs deployed to Kentucky over the weekend, serving up warm meals to tornado victims and first responders.

Dawson Springs is more than 150 miles southwest of New Albany.

"To think this traveled so far, this is my dad's grandparents," Swatzell wrote in the comments section of Posten's Facebook post.

Swatzell told CNN his family is trying to determine which household the photo came from and said his family plans to meet with Posten later in the week to retrieve the photo.

"[Social media is] a really powerful informational tool and when it's at its best, it's excellent and I'm thankful that when we use it for things like this that it has the power to connect us," Posten said. "It has the power to accomplish things that are next to impossible."