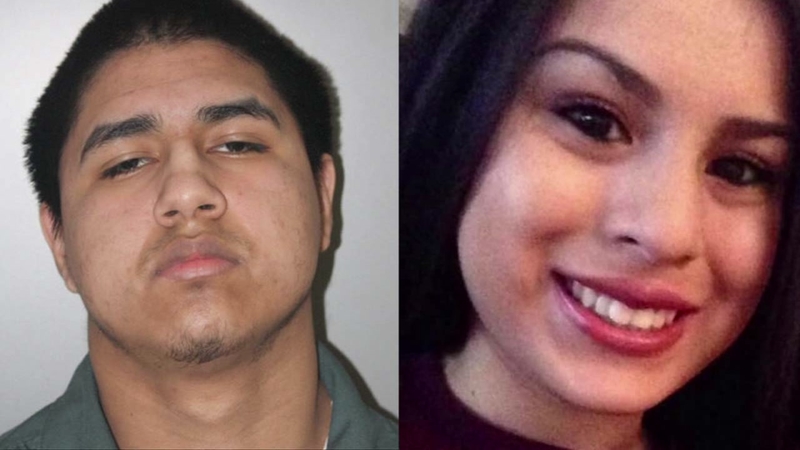 SOUTH HOUSTON, Texas (KTRK) -- A teenager will spend the rest of his life in prison after cell phone video and pictures helped convict him in the murder of his girlfriend, whom he killed when they were both just 15 years old.

Jesus Campos Jr., now 18, was charged with Karen Perez's murder in May 2016 after her body was found under a sink at an abandoned apartment complex in South Houston.

Campos' identity was not revealed to the public at the time because he was a juvenile.

Campos sent a text message to Perez ordering her to skip class at South Houston High School and meet him at nearby tennis courts. If she did not, investigators say he threatened to kill her.

Surveillance video from a local taqueria shows the two leaving hand in hand. They then went to the apartment complex where authorities say Campos raped and strangled Perez while recording the acts on his cell phone.

The recording was discovered by investigators during a search. Perez can be heard crying and begging Campos not to kill her. "I don't want want to die, Jesus," she said.

Perez was missing for three days before Campos told his father, "she is not alive." Even though his father took him to Houston police to confess, Campos still denied knowing anything about her disappearance, saying he last saw her at the taqueria.

During those three days, another teen came forward who called Texas EquuSearch and said he was with the group, that included Perez and Campos, who went to those abandoned apartments after leaving the taqueria.

The teen said he and two other teens left and went back to school. Perez and Campos stayed in the apartment alone, and the teen never saw Perez alive again.

Along with the recording of Perez's rape and murder, jurors were also shown graphic images of Perez that Campos shared with his friends after he killed her.

Although the teens knew about her murder, they refused to turn in Campos.

In less than an hour, Campos was found guilty of capital murder, automatically sentencing him to life in prison. He will have a possibility of parole after 40 years.

"I've tried several capital murder cases," Assistant District Attorney Jennifer Meriwether said. "But the recording of Karen being raped, and pleading for her life before she was so viciously murdered, will stay with me for the rest of my life."

Perez was a freshman at South Houston High School. She had recently turned 15 at the time of her death.