Kaitlyn faces the guys she dumped at 'The Bachelorette: The Men Tell All' 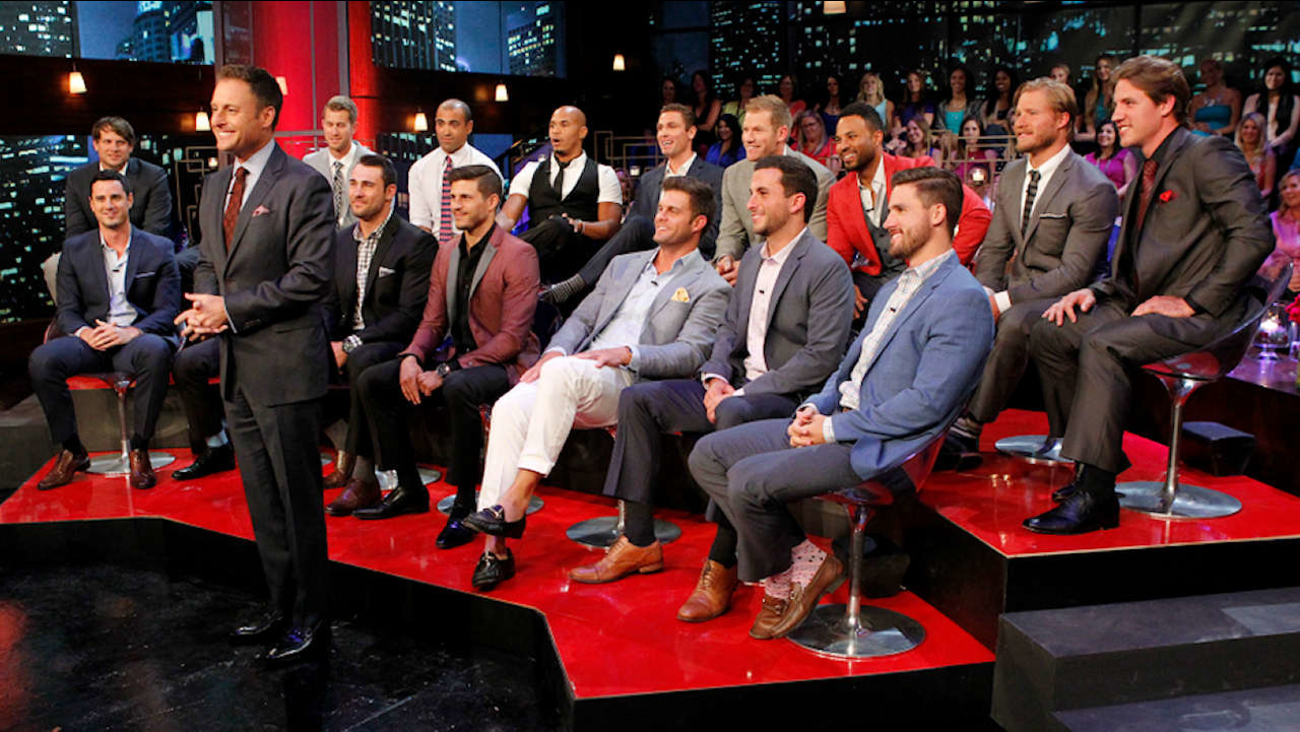 NEW YORK -- "The Bachelorette" Kaitlyn had to face all of the men she sent home during "The Men Tell All". I always feel that most of the men look better than they did during the season during this show, what do you think? After a quick recap of the season so far, the men got their first chance to speak out. 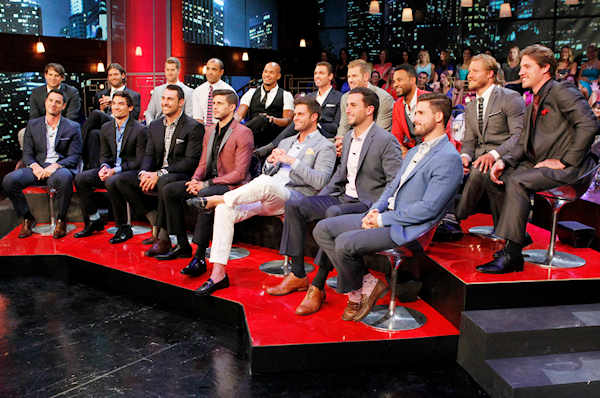 Tanner kicked it off by calling Ian out for saying the guys were lame and shallow and thought that Ian missed out on being friends with a bunch of great guys. He said he doesn't want an apology to them because it would fall on deaf ears at this point, but he thinks that Kaitlyn deserves an apology. Corey defended Ian and said that he thought his assessment of Kaitlyn is spot on. Jared and Ben H. said to Corey that they didn't want to hear him bash her and that he wasn't even on the show long enough to get to know her. Ian started parading around and got down on one knee in front of the guys and apologized. Chris Harrison said, "What are you doing?" Ian said that he was down on his knees to apologize for his actions and he wanted everyone to know it, including Kaitlyn's family, his family, the guys, and Kaitlyn. Then, a bunch of the guys shook his hand! 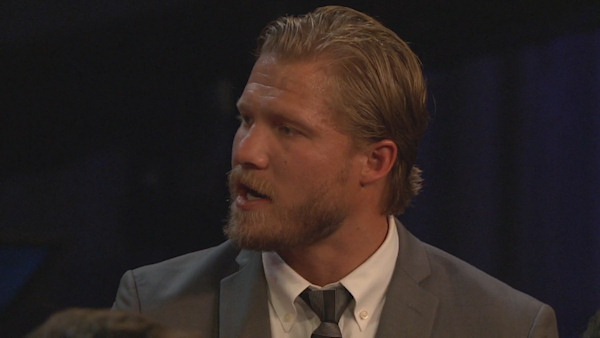 Clint was back next with a whole lot of facial hair. He was one of the few I would say did not look great. Corey was talking again. He's getting a little annoying, considering we hardly saw him on the show. Clint said, "First of all, I'm a straight man and I was there for Kaitlyn." He said that he just had a strong friend in JJ. JJ said that the villain stuff was tongue and cheek and it wasn't real. Corey said that he didn't get the relationship between JJ and Clint and the talk just turned a little strange again. But, JJ tried to say that he just found a real friend in Clint. 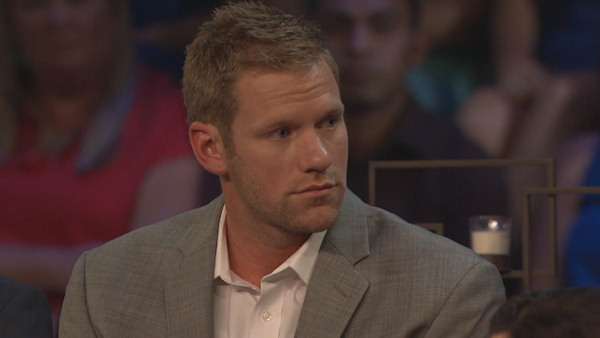 Kupah jumped in and said that he hated that Nick joined the show late. Jonathan said that he blames Kaitlyn for bringing Nick on, but if that's who she wants then she had to bring him on. Cupcake said that he wanted Nick to stay so that she could explore her feelings instead of getting engaged at the end and still wondering about Nick. Then Clint said that Joshua thought his own intuition was better than Kaitlyn's and that's not right. The crowd actually applauded at that. Kupah said that she should have left the show if she wanted to date Nick. Joshua said that she saw her husband in that room and then an outsider came in, and that's what he had a hard time with. Kupah said he didn't think that Kaitlyn handled herself the best in the role as "The Bachelorette".

After reliving the Clint and JJ showdown and fight, JJ admitted that he needed a slap in the face for how he acted with Clint and for calling him out in front of everyone. Chris Harrison said that Kaitlyn actually really liked JJ but JJ said that he lost momentum and other guys got ahead of him relationship-wise. When JJ said that Clint and he talked about Kaitlyn all the time the other guys couldn't stop laughing about him! Oh wait, here goes Corey spouting off again about JJ and no one even hardly knows him. Why did the this show waste so much time on him? JJ apologized for ribbing the guys because he was just having fun with his "brand of humor" and he said he should have been more thoughtful. Then Chris Harrison confirmed that JJ would be on "Bachelor in Paradise 2". 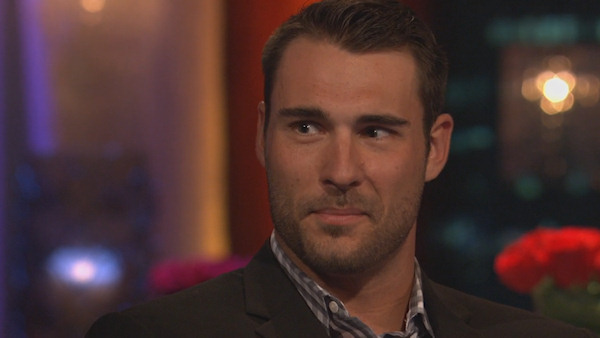 Beautiful Ben Z. was in the hot seat next. He said that he was truly blindsided by Kaitlyn letting him go. He said that he thought they were on the same page so he was shocked that she didn't feel the same connection. Ben Z. said that the group date caused him to close himself off a little more than he thought he would. Having a pretend wake ceremony in Ireland reminded him too much of his mom's death. He said that he's learned a lot more about his emotions during this process and he was absolutely in love with her. In case you are wondering, he still hasn't cried since his mother's death.

Jared sat in the hot seat next and he said it's tough listening to Kaitlyn questioning her own judgment in letting him go. He said it wasn't an easy situation for anyone. He said what they had was wonderful and he wished it would have continued but it just didn't work out. He said it wasn't hard to fall in love with her. Jared said that it was hard to come home and never be romantic with Kaitlyn again. He said they had a great road trip and then he got sent home. Jared said that he is moving on but he still thinks about her. As for his awful beard: he said he had to get rid of the spotty beard because Chris Harrison told him to shave. He did look much better!

Then, the guy that everyone thinks could be the next "Bachelor" took the hot seat, Ben H.! Oh yes, he's a sweet and handsome hunk of man. The ladies couldn't stop cheering for him, making him blush! Chris Harrison joked and said up close he doesn't get it because he's not that good looking! As if, Chris Harrison! He said leaving immediately doesn't provide very much closure. He talked about how he felt unlovable and he thinks that it's a common fear amongst people. He said that Kaitlyn told him first that she loved him and it was great validation. He said he has great love and respect for her still. He talked about sharing a room with Shawn and how Kaitlyn visited them in San Antonio. She got away from all of the cameras and microphones. She hopped in bed with Shawn and they all hung out for six hours together. They were going to catch a flight the next day, a handler came in, they covered her with a blanket and then when the guy left, Ben took a shower. He came back after an hour and he said he felt like an outsider. Chris Harrison told him that Kaitlyn regretted telling Shawn he was "the one" then, but he was glad to know what had happened because it validated what he felt when he came back in the room. Ben said that Kaitlyn did admit it and he appreciated that she was honest. 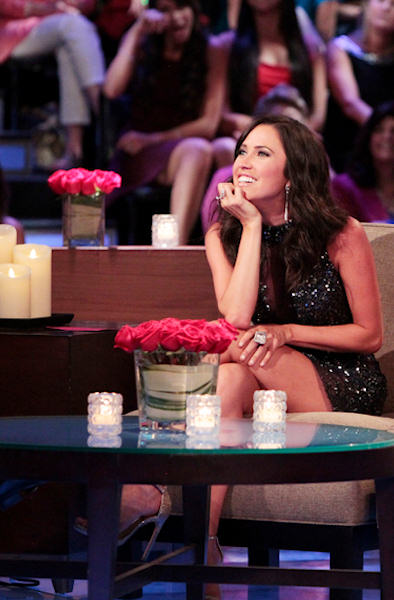 Kaitlyn made her grand entrance to the stage at last and faced the guys. She told them that they looked good and she mentioned that she was shocked to see drunk Ryan there from night 1. Kaitlyn said that she's fine with the decisions she made on the show and she thinks of herself as a tough person, but spreading hate the way people have been is not ok. She said the hardest part is that it affects her family. She says she can handle it but her family is having a tough time. She says she's actually received death threats! Chris Harrison read some tweets, and one said: "You're the worst bachelorette ever in history you're a little #whore so shut your little whore mouth. #slut". Then Chris read another disgusting one and a horrible email. They were awful, I can't believe they read them on TV. The audience cheered for her and the guys all stood up for her. She said she couldn't believe a mother would say that to her. Chris Harrison said he would take Kaitlyn as a role model for his kids over a cyber bully any day.

The guys got to ask her a few questions and Jared went first and asked if the having a cocktail party would have made a difference and she basically said no. She said they would need more time than a cocktail party to get through what was missing. Ben H. asked her why she told Shawn about Nick and didn't tell him? She said she compartmentalized each relationship and where she was with Shawn she needed to tell him and that she wasn't there yet with Ben H. She didn't intend to hide it from him though. Then Kaitlyn talked about allowing Nick onto the show and said that she never expected him to be on and she didn't want any of the guys, even Jonathan who voted for Britt, to think she was disrespecting them. 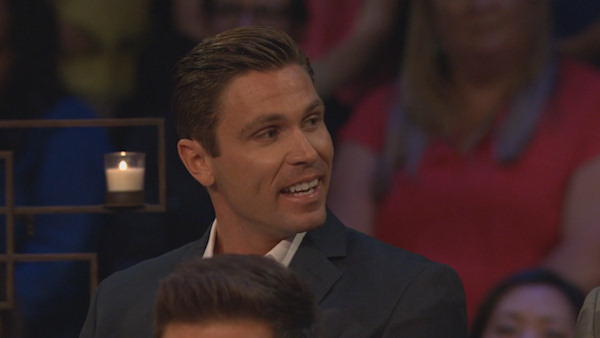 Corey started spouting off again and Kaitlyn said that if he was in her position then maybe he would have done the same thing. JJ stuck up for her saying that she had something special with Nick. Tanner said that he agrees that she did the right thing but the delivery of it was poor. Kaitlyn said that she really struggled with it and she really did care what their opinion was. She said, "Guys try to date this many people at once and not make a mistake, I dare you, it's hard, it's hard." 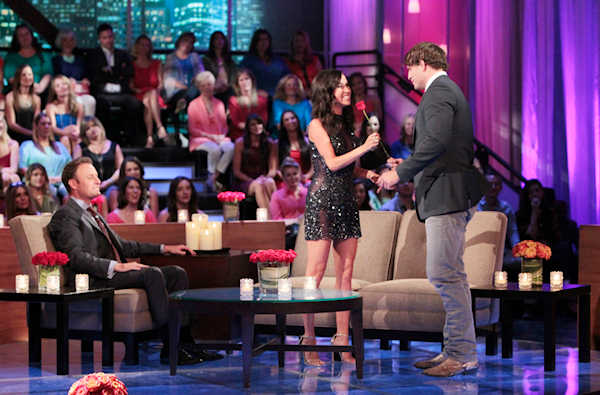 Lastly, Chris Harrison let some of the guys make amends. Ryan the drunk guy from the first night said he was "pretty horned up" and he gave a rose to Kaitlyn and said he was sorry that he threw it "like a dumbass" on that first night. Kaitlyn asked Clint why he didn't treat her the way he treated JJ. They just joked a little and Clint didn't really have much to say about it. 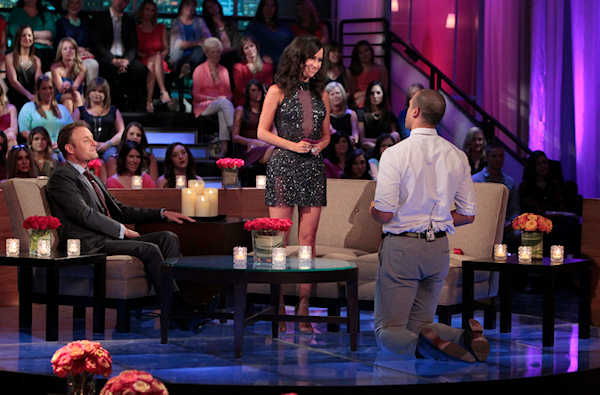 Ian said that he gave Kaitlyn notes every week and he wrote her an apology note and got on his knees again and he apologized. He said that he was so sorry and he received backlash too from the show as a result of what he said. They hugged it out and that was that.