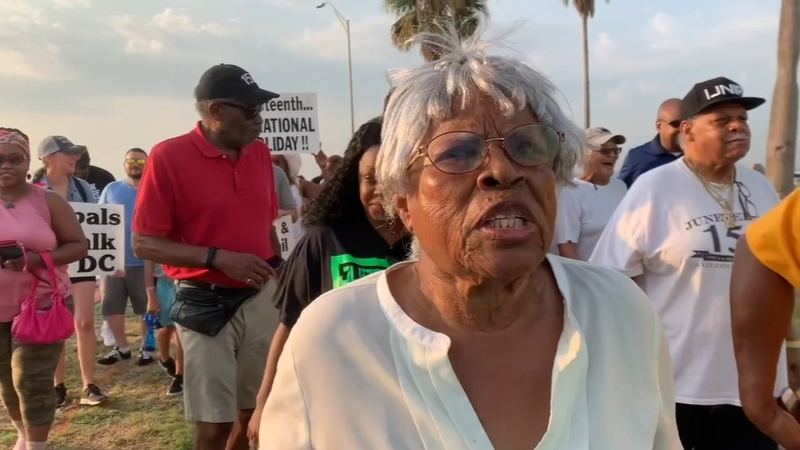 Galveston, Texas (KTRK) -- Opal Lee, 92, walked through the streets of Galveston on Saturday as part of her ongoing quest to make Juneteenth a national holiday.

Juneteenth is observed by many states on June 19 to celebrate the freeing of slaves. The Emancipation Proclamation went into effect in January 1863, but it wasn't until June of 1865 when Texas was forced to free its enslaved people.

Freed people celebrated in the streets of Galveston on that day in 1865. Opal said she's glad to be walking in that same area.

Juneteenth is a National day of Observance, but Opal said it should be an official national holiday. That's why she began her campaign to walk and raise awareness.

"I feel like 90 year olds have something to offer, and we don't have to sit and watch and wait for the master to come get us," Lee said.

She said she's walked through so many communities for the cause, that she's lost count. She travels 2.5 miles at each stop to honor the two and a half years it took for Texas slaves to be freed.

"I can't count them. But I started with Fort Worth and Dallas. Freeport and Texarkana. Little Rock and Fort Smith. Denver, Middleton. I've been to Atlanta, Madison, Wisconsin, Milwaukee. I've been down to North and South Carolina. I've just been all over," Opal said.

She planned her Houston walk for the same time as the Democratic National Committee's primary debate, hoping to lobby a potential future president to join her cause.

On Saturday, she was surrounded by supporters as she made her way down Seawall Boulevard.

"They are awesome. Awesome is the word. I am so pleased, I am," Lee said.