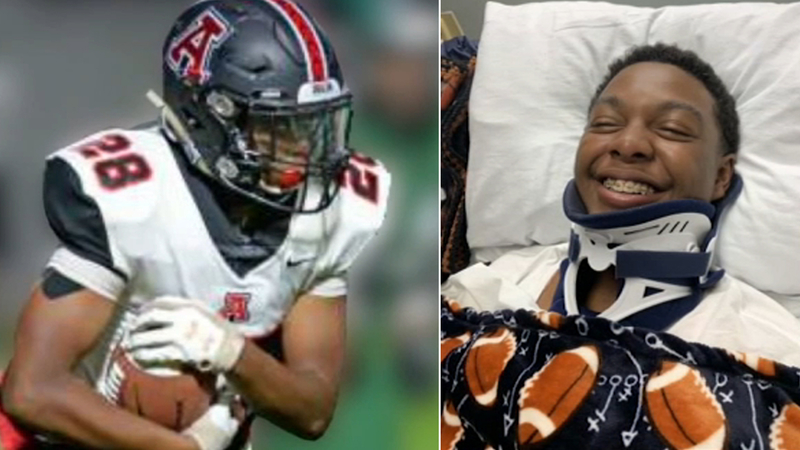 HOUSTON, Texas (KTRK) -- A prayer rally will be held for a 15-year-old high school football player in Fort Bend County who was left paralyzed after a tackle during a game two weeks ago.

On Sept. 12 during during a junior varsity game, he tackled the quarterback and didn't get up. Jordyn suffered a spinal cord injury.

"Just in the blink of an eye, literally, in front of my eyes, our lives have changed," his mother Deandrea Wade said.

Wade says Jordyn is paralyzed from the shoulders down, but has some feelings in his arms and legs. He has been recovering at TIRR Memorial Hermann, a rehabilitation center in the Texas Medical Center.

After a week in the Intensive Care Unit at Memorial Hermann, he was moved to TIRR.

“WE NEED PRAYERS”: Jordyn Hawkins, 15, suffered a spinal cord injury during a football game at Fort Bend’s Austin HS 2 weeks ago. He sent us this video tonight. There is a prayer rally tomorrow night on the same field where he was hurt. #prayforjordyn #bulldogsforjordyn #abc13 pic.twitter.com/kgRNHlIh4r

Jordyn still has his big smile and gratitude for all the support.

"Hi everyone. I'm Jordyn. I want to thank everyone for their well wishes and support," he said in a video he recorded from his hospital bed Thursday night and provided to ABC13. "Please continue to pray for my full recovery as I prepare to walk out of here."

Wade says doctors told them there is a 10 percent chance Jordyn will walk again. Wade says her son won't accept those chances and neither will she.

"He's a fighter and he loves a challenge so this is just another challenge for us and I know he's going to pull through," Wade said.

The family says they believe in the power of prayer, and that's why they're asking everyone to come out Friday from 6 p.m.- 8 p.m. to the field at Austin High School, 3434 Pheasant Creek Drive in Sugar Land, for the prayer rally.

It's the same field where Jordyn was injured.

"My biggest thing is for people to pray with us," Wade said. "I believe God is going to provide everything we need, but we need prayers."

They're also asking everyone to wear green in honor of September being Spinal Cord Injury Awareness Month.

Jordyn's parents have set up a GoFundMe to raise money for their son's extended care.

Jordyn Hawkins is asking for prayers after he was paralyzed from the shoulders down at a football game.