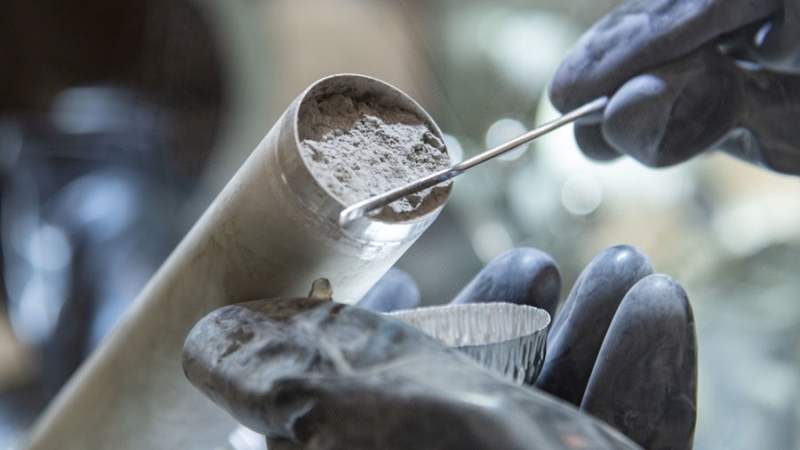 HOUSTON, Texas -- Scientists at the Johnson Space Center this week opened a 50-year-old lunar soil sample they hope will teach them more about the moon and Earth ahead of NASA's upcoming return to the moon.

During the Apollo 17 mission in 1972, astronauts Eugene Cernan and Harrison "Jack" Schmitt collected lunar soil from a landslide near the landing site of Apollo 17. The 70-centimeter canister had two halves, a sealed portion and an unsealed portion, Apollo Sample Curator Ryan Zeigler told Community Impact Newspaper.

Scientists opened the unsealed half-sample 73002-in 2019, but they hope to learn a lot more by opening the sealed half, sample 73001, Zeigler said.

"This is a huge milestone for us and a milestone for the Apollo program as a whole," Zeigler said. "It's really about the earliest history of the solar system."

For one, the vacuum-sealed sample still contains gases collected on the moon. These gases, collected from a foot or more below the lunar surface, will tell scientists about the primordial history of the moon, he said.

Because the moon is not very active-it has no atmosphere or weather-all geological evidence still exists, making the moon a "museum of planetary history," Deputy Apollo Sample Curator Juliane Gross said. This is unlike Earth, which is active and recycles its geological evidence, she said.

Because the moon is essentially frozen in time, it acts as an archive for its own history and Earth's, and this recently opened sealed sample is part of that history, Gross said.

"All we have to do is learn how to read this archive," she said.

Additionally, the sample will help scientists prepare for astronauts' return to the moon during the Artemis missions. Astronauts will land at the moon's south pole, which has some areas that have never been touched by the sun. Astronauts, therefore, may discover ice, and sample 73001 could help scientists understand what kind of ice may form on the south pole, Gross said.

A dozen years ago, ABC13 exclusively talked to one of the astronauts who collected the samples that was just opened.

During the interview, Gene Cernan talked to ABC13 about the process it took to make sure what they collected on the moon would one day help us learn about the moon in the future.

Next week on ABC13, you'll hear what Cernan said it was like on the moon collecting the samples being opened 50 years later, and why he believes it's important for us to go back to the moon and get even more samples.

Understanding what is in potentially discovered ice will help scientists know if it would be safe to drink or even convert into rocket fuel, Zeigler said.

"That's one of the exciting reasons we want to go to the south pole," Gross said.

The sample is being opened now because technology has advanced enough to give scientists greater tools to understand the samples, Zeigler said. NASA scientists in the '70s had the foresight to get vacuum-sealed samples and put them away for future scientists because they knew technology would evolve, Gross said.

Scientists spent a lot of time practicing and took extensive scans of the sample at The University of Texas using X-ray CT technology before opening it.

"We had to be patient," Zeigler said.

Scientists in the Astromaterials Research and Exploration Science Division at the Johnson Space Center have opened three samples since the Apollo Next Generation Sample Analysis Program began in 2019. They still have three more samples to open but did not reveal a time frame for when those open, only that it will be more than another three years before they are all open.

"It won't be another 50 years before we open another sample," Zeigler said.