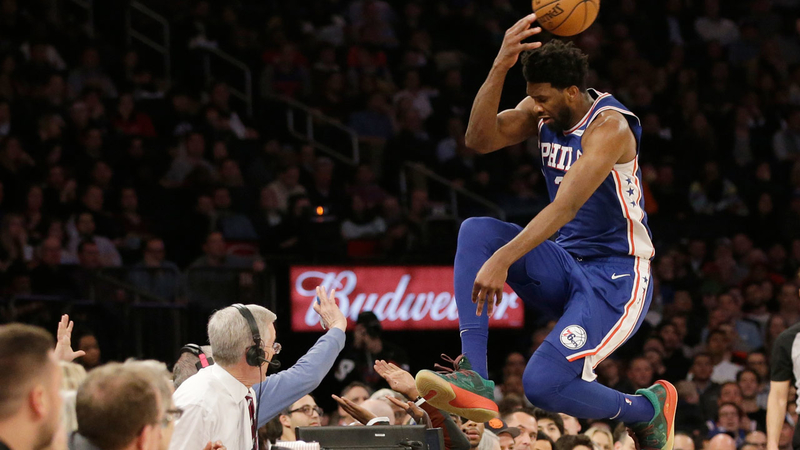 For Joel Embiid, it was simply the type of play he is always going to try to make. For award-winning actress Regina King, it was a moment she won't soon forget.

King was sitting in the front row at Madison Square Garden when the 7-foot Philadelphia 76ers center came charging her way in pursuit of a loose ball during the third quarter.

Embiid leaped into the stands, clearing King, but crashed feet first into the MSG Network statistician working next to broadcaster Mike Breen.

Imagine the last thing you ever see is Joel Embiid running full speed at you 😵 pic.twitter.com/Aqri0RvQ1A

"It's good that I saved her life, I guess, but someone else had to, like, take that," Embiid said, referring to the statistician. "I'm sorry about that."

King, perhaps best known to sports fans as Rod Tidwell's wife in "Jerry Maguire," won a Golden Globe last month for her role in "If Beale Street Could Talk," and she is nominated for an Academy Award for the same role.

She tweeted her thanks that she emerged unscathed.

"Yoooo. Thank you God and @JoelEmbiid for your athletic abilities. Crisis averted," she tweeted.

Yoooo. Thank you God and @JoelEmbiid for your athletic abilities. Crisis averted 🙏🏾 https://t.co/LLTtzECuV4

Asked why he didn't pull up with the Sixers holding a 15-point lead at the time, Embiid said that simply isn't his nature.

"I only know one way to play and that's to play hard and compete," said Embiid, who added he'll do that 100 percent of the time. Even if 76ers coach Brett Brown wishes Embiid would approach things differently.

Asked his thoughts on the play, Brown was matter-of-fact.

"Just like I think our owners and our fans back home were thinking," the coach said. "You respect his aggression and his passion, but you don't want that. I say that out of love and care. It's stuff you hope to avoid."

The statistician somehow stayed in the game. "I didn't see him, but I know he's going to feel it tomorrow,'' said Embiid's teammate Ben Simmons.

Embiid said of his impromptu leap, "I haven't done that since my rookie season -- and it just happened."

King, meanwhile, will be going up against Amy Adams, Marina de Tavira, Emma Stone, and Rachel Weisz for the Oscar for Actress in a Supporting Role.