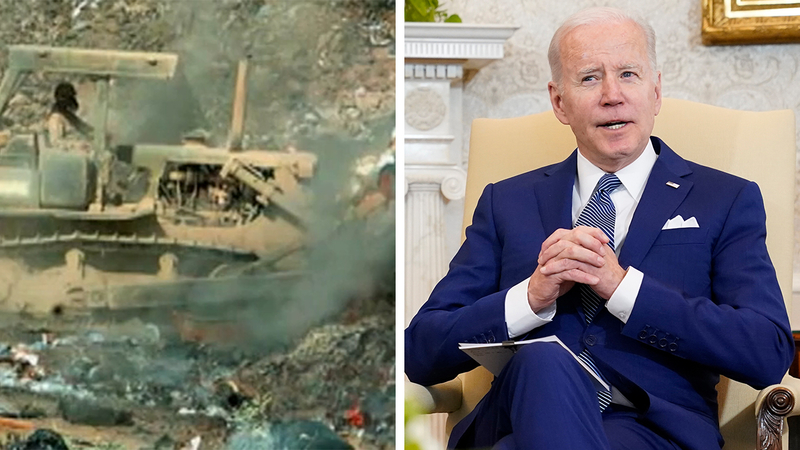 FORT WORTH, Texas (KTRK) -- President Joe Biden visits veterans in Fort Worth today. His focus lands on toxic burn pits and other environmental hazards that can harm veterans' health.

The issue has been very personal to the president since his late son, Beau Biden, died. Biden has said he suspects Beau's exposure to burn pits in Iraq contributed to him developing deadly glioblastoma.

According to the VA, a burn pit is an area devoted to the open-air combustion of trash. The use of burn pits was a common waste disposal practice at military sites outside the United States, such as in Iraq and Afghanistan.

Smoke from burn pits contained substances that may have short- and long-term health effects, especially for those who were exposed for long periods or those more prone to illness such as individuals with pre-existing asthma or other lung or heart conditions, the VA explains on its website.

RELATED: Surviving combat only to die at home: This soldier is picking out his coffin at 35

The president's trip will be a quick one. He was scheduled to depart the White House at 10:15 a.m. and will meet with VA healthcare providers at the Fort Worth VA Clinic at 2:30 p.m.

An hour later, at 3:30 p.m., Biden and VA Secretary Denis McDonough will talk about expanding healthcare access for veterans affected by burn pits and other exposures.

ABC13 spoke to Rosie Torres, the co-founder of Burn Pits 360, last Veterans Day. Her husband was exposed to burn pits and became severely sick while serving in Iraq.

At the time, Torres said the VA told him it was in his head.

Torres said her husband was eventually fired from his job due to a war-time illness and even attempted to take his own life.

"Regardless of whatever toxic exposure issue these people have been impacted by, like, it's our moral obligation as America to take care of them," Torres said. "If there's money for all these other things, then there has to be money to take care of our warfighters, of our veterans and their families."

Last week, the U.S. House approved a bill that would dramatically boost health care services and disability benefits for veterans who had been exposed to the burn pits.

If passed into law, it would increase spending by more than $300 billion over the next decade, according to the Congressional Budget Office.

Those close to the issue of burn pits say they don't need more data and research to be done. What they need is to be taken care of by the country they protected.