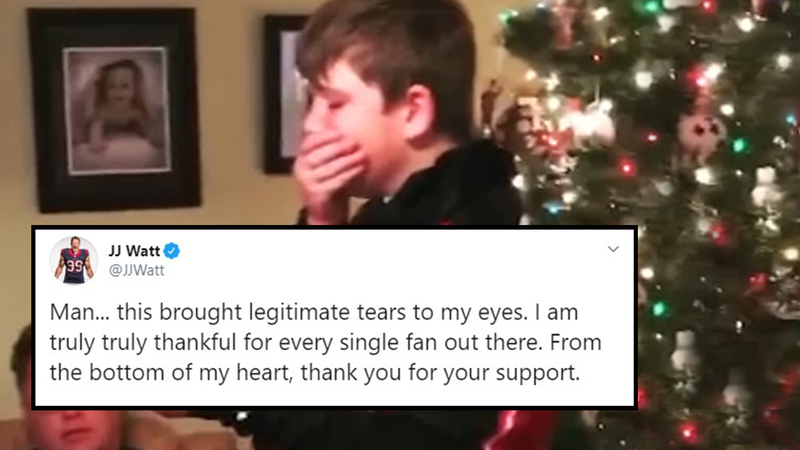 AUSTIN, Texas (KTRK) -- J.J. Watt says he was brought to tears over a video an Austin mom posted of her 12-year-old son receiving tickets to Watt's Charity Classic in June at Minute Maid Park for Christmas.

The video above shows Luke and his 6-year-old brother Jeffrey jump for joy when they open the gift.

"Because of how good you both have been we wanted to make sure...," Luke read through his tears. He couldn't finish the letter because of how emotional he was.

Luke's father posted a video of his sons' reactions on Instagram, gaining the attention of none other than Watt himself.

"This is special!! I truly appreciate Luke and how big of a fan he is," Watt commented. "Do you think he might like to come to our playoff game next weekend?"

Watt went on to post the video on his Twitter, saying it "brought legitimate tears to his eyes."

The boys' father told ABC13 Luke is a huge Watt fan and is a defensive player on his 6th grade football team.

His father says Luke was bullied when he was younger, but was encouraged when he saw Watt stand up for another bullied child.

He says all Luke wanted for Christmas was a chance to see Watt in person.

What he didn't know is he would end up with much more.

Luke's father says the Texans are sending him and his family to the playoff game this Sunday.

The family is so grateful because they say they wouldn't have been able to afford it themselves.