Here's who made the guest list for J.J. and Kealia's tropical wedding 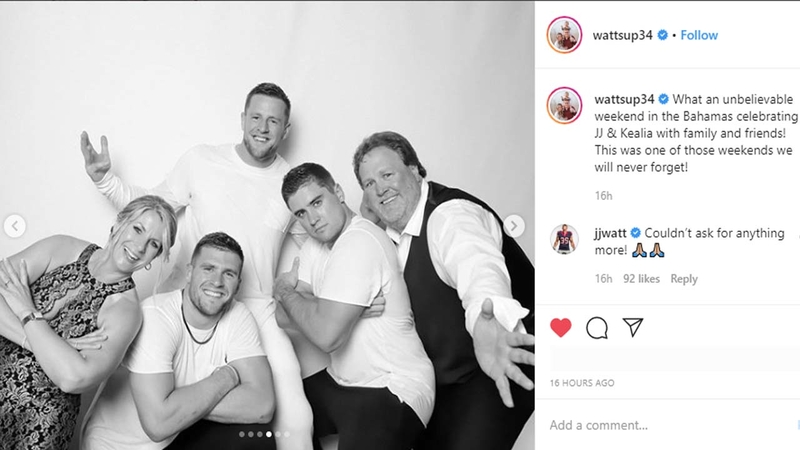 HOUSTON, Texas (KTRK) -- Okay, so your invitation to J.J. Watt and Kealia Ohai's wedding got lost in the mail. Don't worry, ours did too.

But based on social media posts, we were able to decode who did make the coveted guest list as Watt and Ohai made their nuptials official.

We know at least a couple of Ohai's former teammates were there to party with the happy couple as they said "I do" at the Ocean Club, a Four Seasons resort in the Bahamas.


Ohai's former Houston Dash teammate Amber Brooks posted a series of pictures and videos to Instagram, apparently showing the wedding reception. Ohai played for the Dash until January, when the team announced she would be traded to the Chicago Red Stars.

But it seemed the day was truly a family affair.

Leading up to the vows on Saturday, Watt posted photos of himself with his brothers Derek and T.J. in the tropical locale before it was revealed it was the Bahamas.

Also on the family front, Ohai's sister Megan Cushing posted a photo of her and husband Brian Cushing with their boys at the wedding.

Brian Cushing is Watt's former teammate on the Texans.

But where were Watt's current teammates?

It appears Texans quarterback Deshaun Watson tended to other engagements (no pun intended) in Miami, but wished his pal congratulations. Deandre Hopkins seemed to be hanging out at home, but managed to catch the Houston Roughnecks in their second XFL game on Sunday.

Congrats also poured in from other teammates including Johnathan Joseph.

Houston athletes are known for being supportive of each other, with Astros stars Carlos Correa and Justin Verlander also sending them warm wishes.

We don't feel too bad about not being invited, though. Even the Texans mascot Toro was wondering what happened to his invite.

Other fans seemed to be experiencing the same thing.

Either way, we're still thrilled for the couple!

Next time I see my mailman I’m filing a complaint! How could he lose my invitation to @JJWatt’s wedding? https://t.co/YQMQ1t934P

I’ll file my complaint with you @TexansTORO1, they USPS lost my invite too! 😂