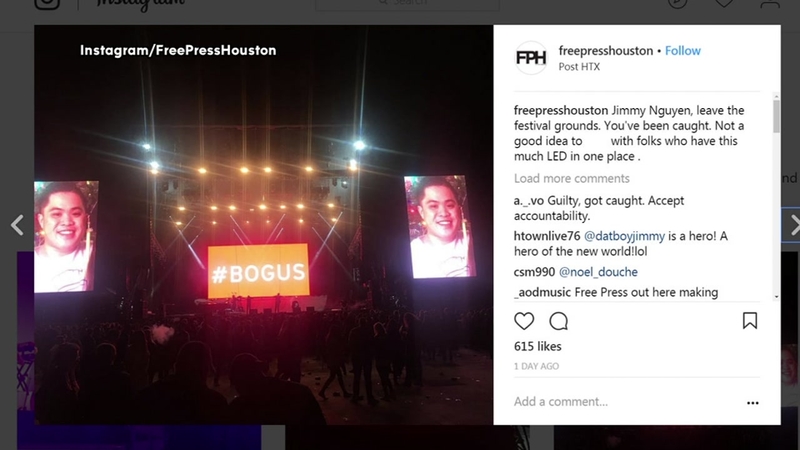 HOUSTON, Texas (KTRK) -- A lot of people who attended the Day for Night festival over the weekend in downtown Houston left the event with a question: Who is Jimmy Nguyen?

Day for Night kept folks in the dark at that moment, which took place just before singer Solange's set on Sunday.

However, event organizer Free Press Houston used its Instagram feed to further call out the man.

"Jimmy Nguyen, leave the festival grounds. You've been caught. Not a good idea to [expletive] with folks who have this much LED in one place," Free Press Houston captioned with a photo of the stage display.

An Instagram user "Instaphan_" shed a little light on the situation, accusing Nguyen on the post that he was selling fake passes.

A user purported to be Nguyen responded, denying selling fake passes but rather using them.

"Was not selling fake passes just got my hands on one and let the wrong person know that I did," user "datboyjimmy" said on the post.

A war of words ensued between the Instagram user and Free Press Houston, which commented in response, "It makes no difference if you were selling them or using [a] pass." The account explained certain areas are off-limits because of the danger of heavy machinery.

"(It's) way cooler to us if you get kicked out than hurt," Free Press Houston commented to "datboyjimmy."

In response to that, the user purported to be Nguyen said he wasn't trying to gain access to VIP areas, and that he wanted to support the event but accused Free Press of being "unorganized and unreasonably priced."

"Keep up the defamation of character and y'all will have a law suit on your hands," the user responded.

Nevertheless, we reached out to Nguyen to get his side of the story, but he has not returned our requests for comment.