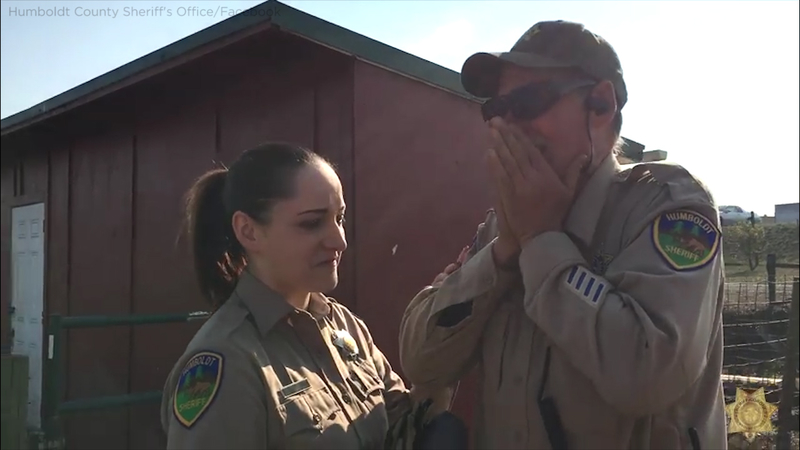 EUREKA, Calif. -- After living his entire life with colorblindness, one Northern California man was brought to tears by a generous gift from his coworkers that allowed him to finally see life in full color.

Jeff Dishmon, a correctional deputy who manages a work-study program at the Humboldt County Correctional Facility, received a pair of specialized glasses Nov. 14 from his longtime coworker Samantha Freese. A fellow correctional deputy, Freese has worked alongside Dishmon for eight years, and the two had become close, calling one another "grandpa" and "granddaughter."

Dishmon's colorblindness had "sometimes been a source of frustration for him and others around him," the Humboldt County Sheriff's Office said, so Freese and other coworkers pitched in to buy him glasses designed to help those with colorblindness see color.

In footage shared by the sheriff's department, both Dishmon and Freese were visibly emotional before he even put the glasses on.

"I think they're working," an emotional Freese joked as Dishmon was left speechless by his first glimpse of a world in vivid color.

"(It's) a different world," Dishmon said through tears as he stared into the distance, spellbound by the landscape.

Freese then introduced Dishmon to a set of purple, green, blue, red and yellow balloons to test out his new specs, and the two longtime coworkers shared an emotional hug.

"You're unbelievable. Thank you so much. Thank you, everybody," he said, adding that he was excited to watch the sunset with his wife.

During a subsequent phone call with his wife, Dishmon broke into tears as he talked about his gift.

"You wouldn't believe this place. This whole place is lit up. The whole world is lit up!" he told her.