A scenic ride in the mountains took a terrifying turn when a Jeep suddenly came crashing down the mountain side.
KTRK 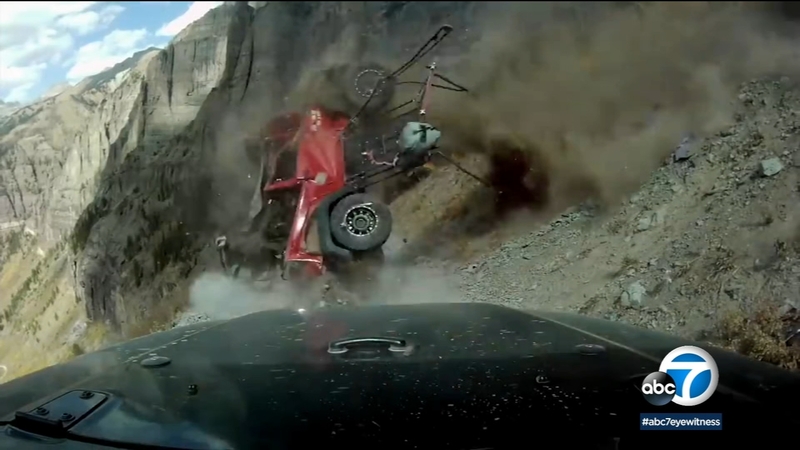 TELLURIDE, Colo. -- A scenic ride in the mountains near Telluride, Colorado took a terrifying turn when a Jeep suddenly came crashing down the mountainside, leaving the passenger inside the vehicle with serious injuries.

Deputies with the San Miguel County Sheriff's Office and first responders arrived to the crash after reports of a vehicle rolling off and down several switchbacks from Black Bear Pass onto Bridal Veil Road on Oct. 10.

The local sheriff says it began when the 22-year-old driver of the Jeep Wrangler Sport stepped out of the vehicle, turned off the engine and put on the emergency brake. But moments later, the Jeep started to roll with the passenger still inside.

Dashcam footage shows the frightening scene as the vehicle goes tumbling down and photos show the Jeep mangled beyond recognition.

Authorities say the driver tried to jump back into the vehicle to try and steer it, but he was thrown into rocks when it left the road. He suffered minor injuries.

As the red Jeep rolled and tumbled down the steep mountainside, the 23-year-old woman was thrown out. She suffered significant injuries.

A black lab puppy named Decker was also thrown out of the vehicle.

Rescuers flew the injured woman to a hospital for treatment, but the dog could not be found and was thought to have been killed.

But a few days later, another couple on the trail heard barking and howling. They used a high-powered spotting scope to locate the stranded pup in steep terrain.

Rescuers were called in and Decker was rescued, and incredibly, the pup had no significant injuries.

The injured woman's father says the rescue of Decker is the best medicine for his daughter who continues to recover from her injuries.