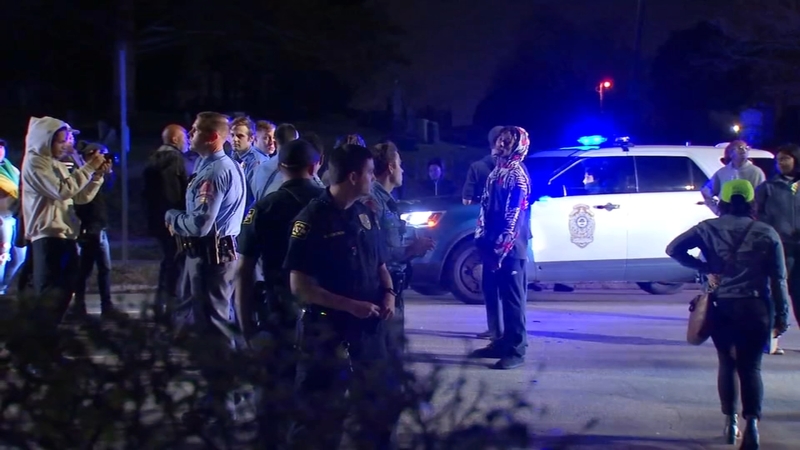 RALEIGH, North Carolina -- It was an emotional night as protests emerged after a man was hospitalized in an officer-involved shooting.

Protesters believe 26-year-old Javier Torres was shot in the back while carrying only a pizza box.

Raleigh police chief Cassandra Deck-Brown spoke on the shooting and subsequent protests Wednesday morning and said the officer's body camera was activated and the department will petition for the footage to be released. Deck-Brown says the footage, along with the released 911 calls, will show that Torres was armed.

"The 911 call ... It's in reference to an individual with a gun," Deck-Brown said of the call. "You will see the individual does have a pizza box, but he does have a gun."

According to a release from the department, the shooting happened Tuesday around 6:45 p.m. near a shopping center. Officers were responding to a report of a man with a gun. A 911 call released reveals a caller concerned over an armed man.

Raleigh Police are investigating an officer-involved shooting. A firearm was found near the 26-year old suspect who was transported to Wake Med. As is standard protocol, the SBI is investigating.

Police said Torres ran upon the arrival of the officers and a chase ensued. Police suspected Torres had stolen a pizza.

According to police, Torres was ordered to stop repeatedly and to drop his gun.

"The officer initially asked Mr. Torres to stop," Deck-Brown said. "That was the initial line of communication."

Torres was shot once and was taken to WakeMed.

Raleigh police said a handgun described by the 911 caller was found at the scene. No officers were injured.

RPD said the officer who fired was wearing a body camera that captured the shooting. Other officers present were wearing cameras as well.

The shooting occurred in the same shopping center where an April 2019 officer-involved shooting happened.

A large crowd of protestors and onlookers gathered at the scene following the shooting and took to Deck-Brown's east Raleigh home.

Witnesses said Torres was only carrying a pizza and that he was headed home to a nearby mobile home park. A crowd collected and protests went on throughout Raleigh, lasting past midnight. Rolanda Byrd was among those present. Byrd's son, Akiel Denkins, was shot and killed by Raleigh police in 2016 in what was ruled as 'justified.'

Large crowds also gathered downtown at the Wake County courthouse on Fayetteville Street and eventually spilled over to the space in front of ABC13's sister station ABC11's studio across the road.

Javier Torres was shot and taken to the hospital.

Demonstraters also stood at the capitol building downtown and around Moore Square. When speaking to the media, Deck-Brown referenced protesters causing harm to people and property.

"This is not who we are as a city," Deck-Brown said. "But it's also important that individuals who have a desire to voice their concerns, there is a method by which they can do that without damaging other people's property, without harming other folks in the process. And we saw that last night...that's not who we are."