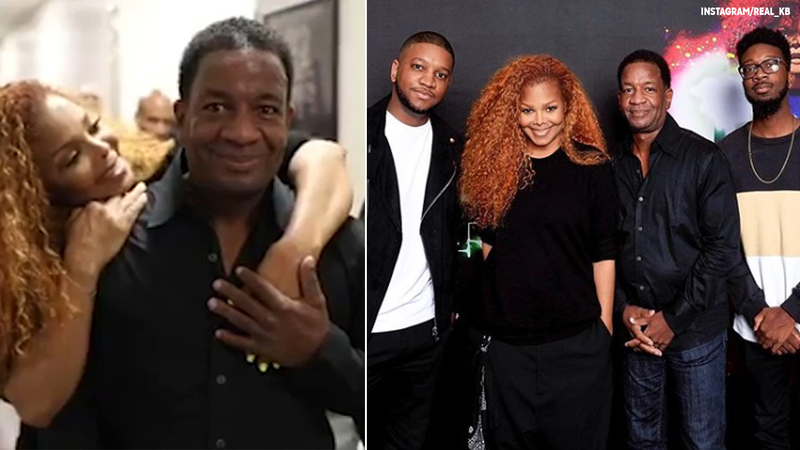 LAS VEGAS (KTRK) -- When it came to meeting Janet Jackson, the encounter could only be described by this Houston family with two words: pure magic.

Last weekend, Keith Strawder went viral for a second time after video showed his priceless reaction to meeting Jackson. Keith is a superfan.

On Father's Day, his sons Chris and KB surprised him with tickets to her headlining residency Metamorphosis at Park Theater at Park MGM resort in Las Vegas.

Keith went viral the first time with his reaction to getting the tickets to the show.

The moment finally arrived to see it all come to fruition, except Keith had no idea he was about to meet the superstar. He says as soon as the show was over, he was ready to head to the lobby to see how pictures they'd taken earlier in the night had turned out.

But his sons had other plans. KB told his dad that he had a friend who wanted to give them some autographed merchandise. Then Keith was told they wanted to do an interview with him about his initial viral video over the tickets.

"They took us through a special elevator that takes us through the back and takes us to this room with all these other celebrities," Keith said. He was stopped and asked about the concert.

It was Janet. And he didn't even know she was there. It took Keith 15 seconds to actually turn and look at Jackson after she put her arm around him.

"To hear that voice and feel her touch me from the back, that took my breath away as you can see," Keith told ABC13. "My breath, my spirit left me for a minute and I just could not believe what was going on."

So what did they talk about?

"All of a sudden it was like we were lifelong friends and had known each other for forever. We talked about San Diego. I'm in San Diego right now, so we talked about San Diego a little bit because I know she lived in the area for a while," Keith said. "Then I asked her if she was tired after a show like that, how she felt. And she told me it takes about four or five hours for her to come down from a show like that."

"My boys... we've been trying to identify, to put a word to how she smelled and it was just like a fragrance... I don't know if you can even buy that!" Keith said.

"I used to say she smelled like pure magic. It was just incredible. I know that scent is nothing you can go to the store and get. Somebody had to create that just for her," KB said. "Just heavenly, just incredible."

KB said he and his brother didn't take as much time to talk with Jackson because they knew the moment was all about their dad, who had only seen her perform prior to this at the Houston Livestock Show and Rodeo.

The magical meeting came about after KB posted the initial video of his dad receiving the tickets. When he saw the video taking off on social media, he used the opportunity to tag Jackson's people in hopes they might help make more happen.

Two weeks later, her team reached out to KB. "(They) said, 'Hey, when are the dates? When are you guys coming? Where are you going to be sitting? We want to make sure that your dad meets Janet after the show. Do not tell him,'" KB explained.

KB said it was tough to keep that secret from his dad for so long, but the family says the meeting was special for another reason.

"A lot of the comments we're getting are how refreshing it is to see the relationship of a black father with his sons and the love that they can see in the video between the father and the son. That's what people are talking about," Keith said. "I think that's another reason why it went viral. It makes us all feel good about some of the positive things in the world."

"People have cried watching this video, and they've said they needed that. They've had bad days, and they would go back and look at the video and see the joy on my dad's face, and it's been great," KB said. "So we just tell everybody thank you so much."

KB said he doesn't know how he and his brother will top this gift, but they have a feeling it's a memory that will last for the rest of their lives.

Two sons surprised their father with tickets to see Janet Jackson in concert and that wasn't the only surprise.