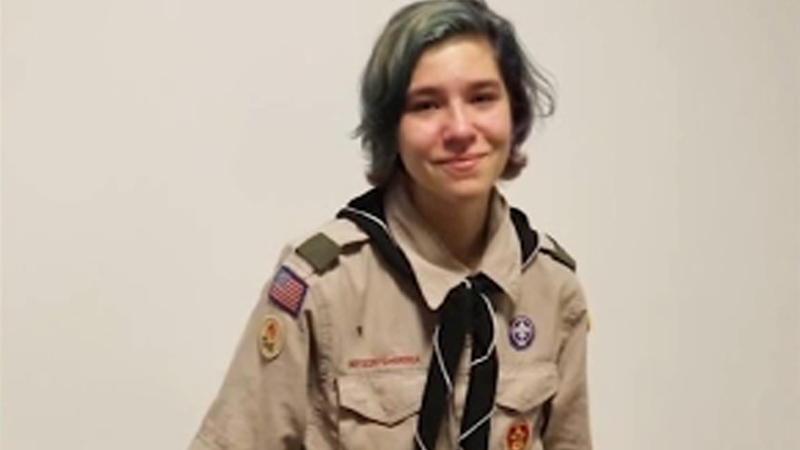 SPLENDORA, Texas (KTRK) -- A teen in the small Texas town of Splendora is breaking barriers, becoming the first transgender Eagle Scout in his community.

Jace King earned the coveted rank after shattering the average timeline for the award.

"It usually takes four to six years, I did it in 25 months," explained Jace. But he was forced to act in a hurry, only joining the Boy Scouts in 2019 when they opened membership to girls.

The Eagle Scout award must be obtained before a scout turns 18 years old. Jace was born a female, but identifies as a male.

"To me, my head and my arms are mine, but the rest of my body is not," he said. "I am a strange, jigsaw puzzle that doesn't belong in that box."

After watching his big brother become an Eagle Scout years ago, he said he always dreamed of following those footsteps. When girls were allowed to join in 2019, he wasted no time signing up.

"When Jace came home that night with the application to join the Boy Scouts, I basically told Jace this is what's going to be expected," said his mother, Micheline King. "There's not going to be a lot of time to enjoy the journey, just enjoy the destination."

Giving up weekends, family time and working with Kingwood troops 1219 and 1377, he persevered all while facing hurtful scrutiny and backlash.

"I've been berated and looked down upon by older adults who were associated with the scouts, saying that I shouldn't be there," said Jace. "That I should be in the Girl Scouts instead."

The hate-fueled banter continued even after his accomplishment was shared on a community Facebook page. The vitriol forced the page's administrators to shut down the comments section. But Jace's mother said hostility has been largely overshadowed by messages of support.

"I've seen a lot of backlash, but truth be told, when Jace became true to themselves, it made them a stronger person. In that right, as they became stronger ... wiser people began to accept them just for who they are," his mother said.

The trail blazing moment came just as Texas lawmakers work to tighten restrictions on transgender medical treatment. The Senate passed a bill to criminalize hormone treatment or surgery for gender transitioning before a child turns 18.

Senate Bill 1646 must next face a vote in the House, where according to the Texas Tribune, another bill targeting transgender children has recently stalled.

But Jace hopes his story of defeating odds will inspire other trans children to follow their passions and accept themselves.

"It doesn't matter who you are, what you're born as, or what you identify as, you can make great feats because it is possible for anyone," he said.