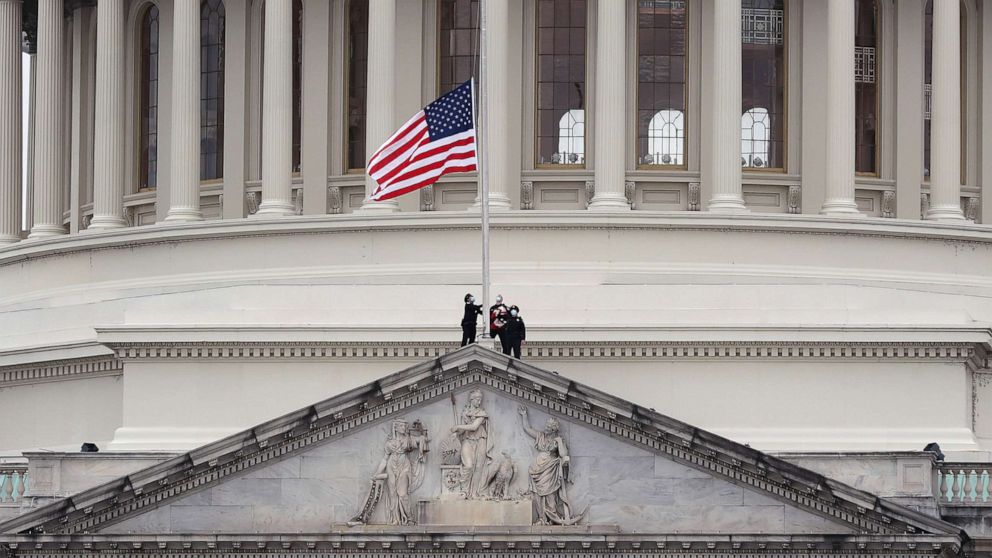 Federal agents and detectives from the D.C. Metropolitan Police Department have launched a broad and multipronged investigation into the mayhem and death Wednesday at the United States Capitol, that sources tell ABC News includes an effort to determine the motives of a paramilitary faction of the mob that invaded the heart of American government.

Investigators have begun the painstaking task of unwinding and documenting the events of Jan. 6, as thousands of pro-Trump rally-goers crossed the National Mall, overran Capitol Police metal barricades, and barged through the hallowed halls of the U.S. Capitol building. In the chaos, five people died, including Capitol Police officer Brian Sicknick.

Already, the Department of Justice has announced numerous arrests of intruders, including one who posted photos of himself seated at House Speaker Nancy Pelosi's desk.

"The idiots who self-identify will be the first to go," Boyce said.

A priority will be determining whether any protesters contributed or caused Sicknick's death, sources involved in the investigation told ABC News. Authorities currently believe that his death was driven by a medical condition, but they are also vigorously examining reports that he was attacked with a fire extinguisher or other item at the Capitol. So far, those reports of an attack have not been confirmed, and authorities are hoping to locate video or other imagery from the scene that can shed light on what occurred.

In addition to determining how Sicknick died, investigators are also documenting the moments that lead up to the fatal police shooting of a 35-year-old San Diego woman named Ashli Elizabeth Babbitt. Video shows Babbitt was shot as she was trying to crawl through a broken glass window in a door to the Speaker's Lobby.

Officials face an array of other challenges. Investigators from the Bureau of Alcohol Tobacco and Firearms determined that bombs planted at the Democratic and Republican Party headquarters were genuine devices.

Bomb technicians blasted the devices with water cannons to essentially break them apart and render them harmless. Investigators are examining the recovered pieces to look for clues about how the devices was constructed and the sources of the components, sources said. They have also released a surveillance photo of a heavily cloaked man they believe planted the explosives.

"The devices were disabled and turned over to the FBI for further investigation and analysis," Capitol Police said Thursday.

Another task will be to determine why footage shows some intruders roaming congressional corridors dressed in paramilitary gear, carrying zip ties and duffle bags that appear to have a purpose beyond posing for selfies or waving flags.

Two officials familiar with the investigation said law enforcement is working to not only identify the hundreds of rioters, but distinguish between those who followed the mob, and those who may have wished to harm Vice President Mike Pence or congressional leaders who were gathered to complete the certification of the 2020 presidential election.

Law enforcement officials told ABC News that investigators will use cellphone data to identify individual users whose phones sent out signals from inside the Capitol.

ABC News national security analyst and former Deputy Assistant Secretary of Defense Mick Mulroy, a retired CIA officer and U.S. Marine, said he expects the FBI will be conducting a full counterintelligence sweep on all those who participated in the assault, especially those who were apprehended, to determine possible foreign intelligence ties.

"It is possible, if not likely, that foreign intelligence service, including the Russians, would clandestinely fund groups like the Proud Boys or Oath Keepers as part of a covert influence campaign to pit Americans against one another," Mulroy said. "It is also possible that they would exploit an opportunity to go into the facilities and offices in the Senate or House that contain sensitive information."

Department of Justice officials told reporters that their goal is to identify people and, in certain cases, arrest them with "placeholder charges" as they investigate how they came to the Capitol and how much planning was involved in the attack. Kohl said it would be too early at this point to discuss any evidence of a foreign operation.

In addition to all of the efforts underway to sort out charges for those involved in the Capitol Breach, congressional leaders said they anticipate a separate investigation will be conducted to examine the conduct of U.S. Capitol Police officers in the heat of the unrest.

With so many investigative threads being pulled, federal and local authorities have repeatedly emphasized that more arrests and charges are expected in the coming days, weeks, and months.

"Today's charges are just the beginning of the FBI's ongoing efforts to hold those responsible for the criminal acts of violence and destruction that unfolded during the U.S. Capitol building breach on January 6th," FBI Director Christopher Wray said Friday.

Meanwhile, as President Trump reportedly discusses the possibility of pardoning himself before leaving office, investigators signaled Friday that they were not likely to pursue charges against those accused of inciting the riots at a rally on the National Mall earlier Wednesday. Speakers at the rally included the president and several members of his family.

"We don't expect any charges of that nature," a Justice Department official said Friday.