'I thought he was going to kill me': 95-year-old WWII vet stabbed in robbery 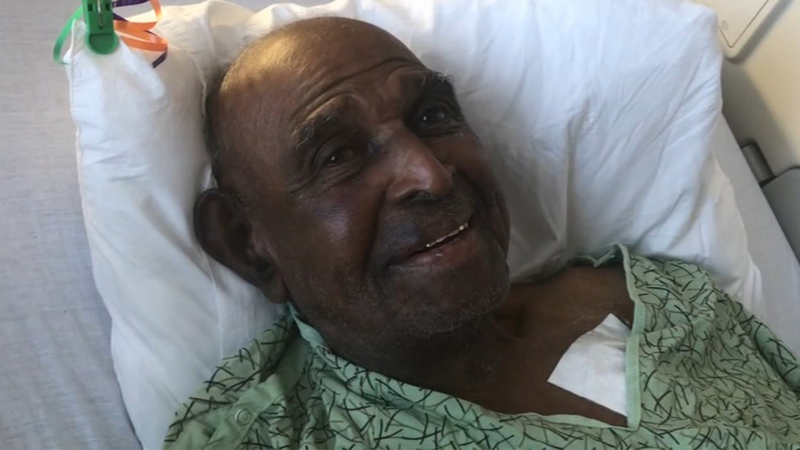 TEXAS CITY, Texas (KTRK) -- Jesse Walker, Jr. is a veteran of WWII who served in the U.S. Army in Europe and returned home to live a full life.

Early Monday morning, he faced what he feared would be his final moments.

He survived WW ll- only to be stabbed by robber in his own home 2 days ago. Jesse Walker Jr spending his 95th birthday in a hospital- we’re live at 5/6 #abc13 pic.twitter.com/I5T2bTOJgc

"I thought he was going to kill me," said Walker from his hospital bed, which had 'Happy Birthday' balloons tied to the handrail. He's celebrating his 95th birthday. "He had a knife."

Walker heard someone knocking on his garage door after midnight Monday morning. Neighbors said Walker would always help people who needed something, from food to home essentials.

In this case, it was a robber armed with a knife and he used it on Walker, cutting him on his arm, chest, and hitting his face so hard, he injured his right eye and cheek.

"He's the heart of our street," said one of his neighbors.

One of them ran to Walker's defense and wrestled with the robber while his father called police. Still, the suspect, said to have facial and head tattoos, managed to get away with Walker's wallet and whatever cash it contained.

According to a Texas City police spokesperson, the suspect was arrested Tuesday on an unrelated charge and is now in the Galveston County jail as the investigation continues.

A relative said she was told the man was wanted in another robbery in the Texas City area. Walker initially resisted being taken to a hospital. As it turns out, it may have saved his life.

His daughter, Kathryn Robinson, said he had low blood pressure.

"I don't know if it was the trauma that brought it on, but doctors said 'Your father has heart problems,'" she said.

In addition to his stab wounds and bruises, Walker now has a pacemaker, which was implanted during an emergency surgery.

"God works in mysterious ways," said a family friend. "If that hadn't happened, the heart disease might not have been found in time."

The 95-year-old is now thinking about self-defense.

"I want to get a gun," he said. Maybe for Christmas or his next birthday.

READ ALSO: Elderly couple attacked by 2 men inside their own home during burglary

Police say during the attack, the two men pushed the grandmother to the ground and punched the grandfather in the stomach.