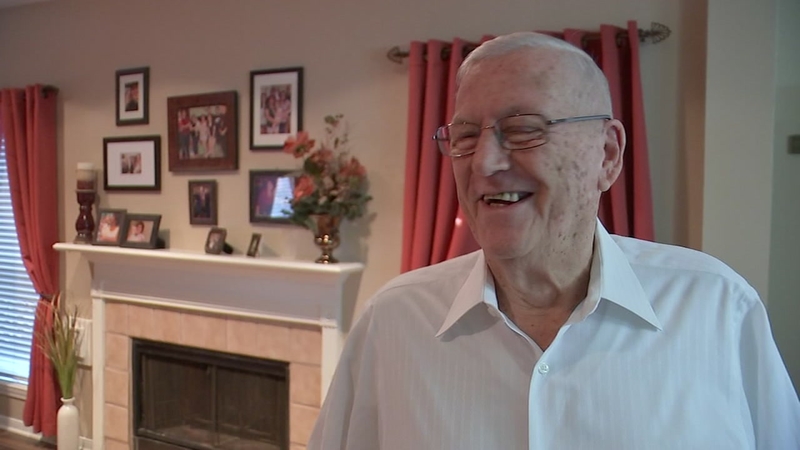 HOUSTON, Texas (KTRK) -- One year ago, after the rain stopped and we all caught our first glimpse of post Harvey sunshine, the mood changed for the first time in four days. Finally, a sigh of relief.

But there were still plenty of people who needed rescuing.

My photographer and I found ourselves in a flat-bottom boat drifting through a northwest Houston neighborhood off West Little York Road west of Jersey Village. The neighborhood backs up to Horsepen and Langham creeks. The streets had disappeared. It looked like the houses were plopped in the middle of a lake -- a scene we had become too familiar with by day five of storm coverage.

At 5 a.m., I remember the neighborhood was eerily quiet. We took a couple tours up and down the streets, gliding over mailboxes and bushes, calling to people, asking who needed help. Nothing. We were sure everyone who needed help had already gotten it.

And then, the sun came up.

As we were about to move on to the next neighborhood, we started hearing voices. People yelling from upstairs windows, their faces shaded by dark screens.

"Are you taking people? Can you hold on?" shouted one woman.

Of course we could.

For the next three hours, we shuttled people, many who had been sleeping in their second floor bedrooms, to dry land. It was the first time they had left their homes in close to a week.

We turned onto Neston Drive, ready for another pick-up and floated towards a brick house with a white garage door. Charles Rummelein, a Korean War veteran, waded down the front walkway and towards our boat. We had no idea the kind of impact Charles would have on our viewers.

'Just another piece of life.' Eyewitness News reporter Courtney Fischer reunites with Mr. Charles, who is still giving out pearls of wisdom.

Charles, in his eighties, climbed into our boat wearing a navy blazer, shorts, and the biggest smile.

"It's just another piece of life!" Charles said when we asked him how he was dealing with the flooding. Charles shrugged it off like it was no big deal. "We'll get through it."

Charles, a Korean War veteran, is keeping the historic flooding in perspective.

I don't know if it was the sunshine, Charles' laugh, the fact that he wanted me to ask Melanie Lawson if she would go dancing with him, but we all couldn't stop smiling. Charles reminded Houston how good it felt to laugh when many felt hopeless.

One year later, the sheetrock is repaired in his daughter's home on Neston Drive and Charles' smile is as big as ever.

"Time goes by so fast, it's amazing," he said, as we came back for a visit. "You sit back and wonder. It was like yesterday."

"You were a bright spot for so many people during such a difficult time," I tell him. "Everyone appreciated your outlook on life."

Then Charles offered his best advice yet.

"Just stay healthy and stay upbeat, and do the best you can. It's one life we have, and let's do the best of it."

You're so right, Charles.

Thank you for sharing that smile with us.

ABC13 reporter Courtney Fischer reunites with a Harvey survivor that made everyone smile.