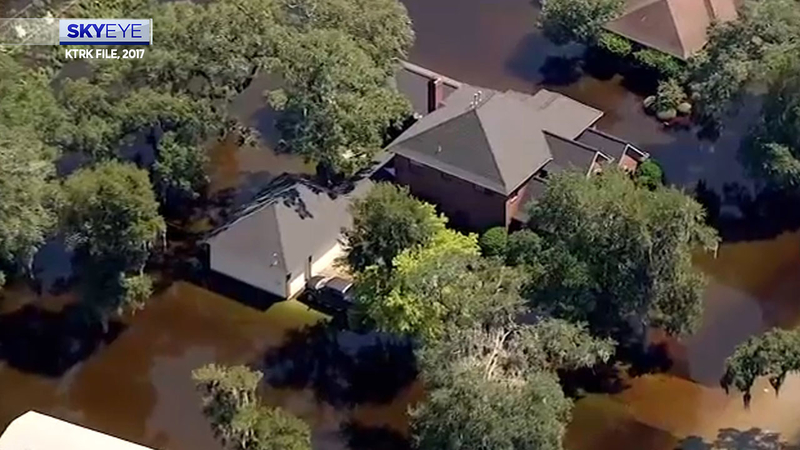 Dickinson homes impacted by Hurricane Harvey will soon have buyers

DICKINSON, Texas (KTRK) -- Dickinson residents that were affected by Hurricane Harvey will soon have the option to sell their homes, and the property won't necessarily be turned into an empty space.

There are eight sections in Dickinson that were hit hard by Hurricane Harvey where residents are eligible for homes to be bought by the city.

It's a storm Dan Morgan remembers well. "Same if you turned it into a four-foot-deep swimming pool," Morgan recalled. "It went up to about my waist height in the house."

Neighbors can even receive $35,000 in relocation assistance if they stay in Dickinson. "I think there's a lot of people that need help like that," Morgan explained.

Here's how it works. Neighbors can begin applying on July 1.

They'll find out by the end of the year if they're selected. The properties would be demolished.

Normally, buyback programs would mean those places be kept as green spaces. Not this time, according to Mayor Sean Skipworth.

"Acquisition is a new thing that they're trying out as it's been explained to me," Skipworth said. "The home will be demolished, and then a flood mitigated home would be rebuilt on that property."

The program is voluntary. You must prove flood damage and own the home. "This isn't where we can come in and give you a million dollars for a small house," Skipworth explained. "They're capped. It's fair market value. There are specific guidelines about that as well."

IF YOU'RE NOT IN ONE OF THE SELECTED AREAS, CONTACT THE CITY BY THE END OF THE MONTH

It runs through the end of April. If your home isn't in one of the selected regions, now is the time to contact city leaders.

"We want to hear from you," Skipworth said. "We can't guarantee because you said, my house flooded a lot that we would add it to the area, but we certainly do that, and if there's an area that we have not adequately addressed by not making them eligible, we want to know that."

A program aimed to remove blight and help neighbors still picking up the pieces nearly five years after Harvey severely impacted Dickinson. "To me, the people in this neighborhood are pretty strong," Morgan said. "They've been here a while. This is their house."

The most a single-family home can receive is about $330,000. If the property has a new home built, flood mitigations will be implemented. This way, hopefully, it won't flood again if another hurricane comes through.