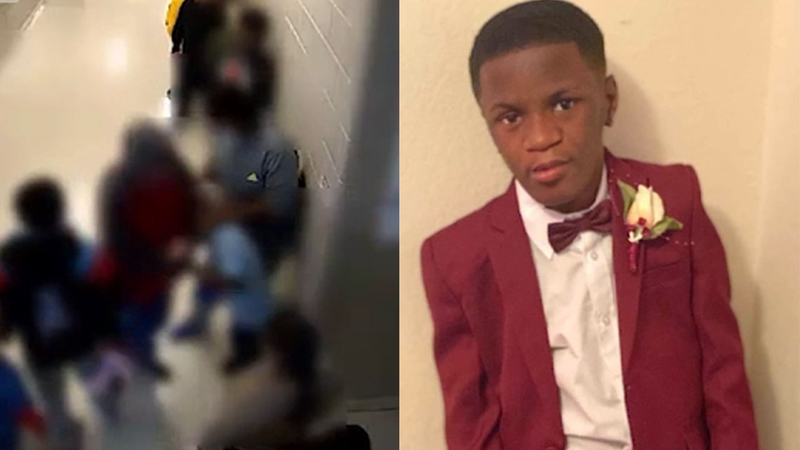 HUMBLE, Texas (KTRK) -- A grandmother in Humble is pleading for accountability after her grandson was savagely beaten up at school by another student.

A video of the incident shows the moment 11-year-old Sekai was attacked at Jones Middle School. Three district aides were there when the incident happened on Jan. 25.

"I was a mad Black woman. Bluntly said, I was angry," said Sekai's grandmother, Veda Cavitt. "My heart just fell to the floor. Had I been in that same situation, I as a parent, as a mother, as a human being, could not just stand by and watch a brutal attack."

Cavitt said she doesn't blame the other student but blames the three aides seen in the video. She said she met with district officials and demanded the aides be fired.

"Those adults in that video just stood there. They didn't attempt to help my child get up off the ground," Cavitt said. "They did not offer him any assistance. They didn't even check to see if he was injured."

She said Sekai is 4 feet 7 inches tall and weighs 85 pounds. He is on the autism spectrum and is nonverbal.

"I am his voice. I am his voice and I will make sure that whatever his injustices are, they will be heard," she said.

"Paraprofessionals get paid very little money, so when they have to make that decision, they probably thought about their livelihood because one wrong step, one wrong move, they could be terminated just like that for no reason," said Candis Houston, the president of the Aldine ISD Teacher's Union and a candidate for state representative. "Still, not a reason not to intervene."

The district sent the following statement regarding the incident:

Aldine ISD is aware of an incident that occurred between two SLC (Structured Learning Classroom) students on Jan. 25 at Jones Middle School. An investigation was conducted immediately and appropriate administrative action has been taken regarding the employees. Aldine ISD takes these situations seriously as the safety and security of our students and staff will always be our top priority.