Jan. 21 marks an event worth embracing, National Hugging Day! The holiday began in the U.S. in 1986, first organized by Rev. Kevin Zaborney, and it has since spread to other parts of the globe, according to the website.

While is meant to share the love, there's no harm in the love of competition, right? If you're aspiring to set an ultimate hugging record, here are five that set the bar high. If you think you can beat any of these, read up on how to become an official Guinness World Record holder. 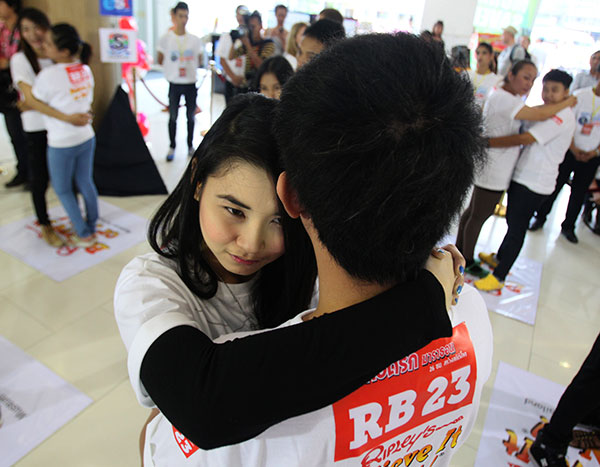 Try to guess these couples' favorite number. The longest marathon hug ever took place in Thailand for Valentine's Day in 2014. Twenty-six couples hugged for 26 hours, 26 minutes and 26 seconds. We're not saying the next group to break the record has to incorporate the number 27, but it'd be pretty neat.


Most hugs given in one minute by an individual

This woman knows how to not let a hug go on for too long. Back in 2014, Carrie Bickmore of Australia set up a veritable assembly line of hug recipients to dole out 77 hugs in just 60 seconds.

More than 10,000 people came together for a record-breaking bear hug on May 7, 2010. This was the third time Canadian students put on the hugging event, which was originally inspired by Canadian teenager Erin Gannon's battle with cancer and continued after her death, according to the Orleans Star.

Let's hope no one was an unlucky third wheel at this event. On Valentine's Day in 2012 in Peru, 5,369 couples shared an embrace at the same time. The event was meant to spread a message of peace and hope, according to Guinness.

"The hug was symbolic and a message to people in Peru and the world that Ayacucho is no longer a place of violence (it was a Shining Path stronghold in the 90s) but a place of love and fraternity," Guinness wrote.

This record holder proves competitive hugging can be fun even on the Internet. Actor Misha Collins of Supernatural convinced people around the world to send in photos of hugs, and he gathered a whopping 108,121 photos for the Internet's biggest collection of hugs in 2013. Collins is quite the hugging enthusiast, as he explained to Guinness when the record was confirmed.

"I've always had a fascination with hugging (I'm not really particular about who or what it is I'm embracing as long as there's a 'squish' factor)," he said. "It's great to see so many people step forward and show a little (PG-rated) love on the Internet in what has become a bit of a platform for gloom, doom and gaudy showmanship."
Report a correction or typo
Related topics:
societydistractionrecordholidaybuzzworthyworld recordu.s. & worldgood newsfeel good
Copyright © 2022 KTRK-TV. All Rights Reserved.
RELATED
Here's how you break a Guinness World Record
BUZZWORTHY
$37M SF 'Full House' home listing was illegitimate, Zillow says
Happy National Siblings Day!
The legend of the immortal Punxsutawney Phil
Alpacas escape enclosure, go on adventure through Ca. neighborhood
TOP STORIES
Coast Guard suspends search for Houston woman off Alaska coast
Child left alone starts E. Houston apartment fire
The Railroad Killer
10-month-old girl left in hot car for 'several' hours, HPD says
Known white supremacist threatening armed standoff at Texas Capitol
Katy ISD employee's husband accused of stabbing wife to death
Judge: COVID-19 asylum restrictions must continue on US-Mexico border
Show More
Track your fitness with an app? Doctors wary about certain ones
Your chance of rain is going up this weekend
Harris County Election Day process under fire by Republican Party
Woman stopped at US border with condom-wrapped fentanyl
Parents reminded they're 'rolling the dice' on kids without COVID shot
More TOP STORIES News