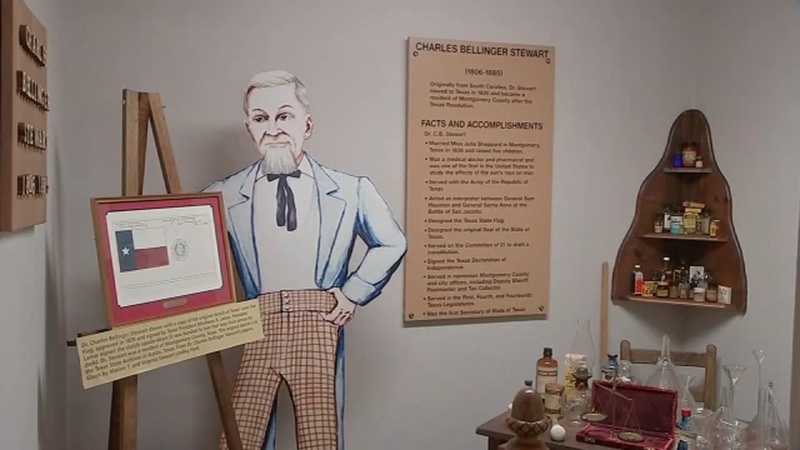 CONROE, Texas (KTRK) -- Conroe is a growing city today outside Houston, but the past isn't lost here yet.

Housed in a century-old home original to Conroe, and moved to a feeder road on I-45 North, is the Montgomery County Heritage Museum, which chronicles a way of life and living from the past.

The museum shows the timeline of early settlers who moved to the frontier. Some arrived at the time Texas was fighting for its independence. One of the men who designed the flag of the new republic was Charles B. Stuart, whose descendant, Pat Lackey, lives in Montgomery County today.

"Montgomery is the birthplace of the Texas Flag," she said.

From cotton to tobacco farming, the commerce of Conroe evolved in oil after it was discovered in the 1930s by Houston oilman George Strake Sr.

"There were more millionaires per capita in Conroe in the 1930s than any other city in the U.S. because of oil," said Larry Forester with the Montgomery County Historical Commission.

The museum highlights all of the area's history, and features relics from the past, like old landline phones.

"Kids get the biggest kick out of that. They don't know what it is," said Sally Corley, museum director.

The museum is housed in a home that dates back nearly a century. Another building is the old roughneck barrack from one of the Conroe oil fields.

Corley said spirits of the past may linger in the home, if you believe in that sort of thing. She said a video surveillance camera captured a man with a lot of keys attached to his belt. She said the man vanishes in video footage.

"They're not scary, they're friendly," said Corley. "If you believe in that type of thing."

The Heritage Museum of Montgomery County is open from Wednesday through Saturday, from 9 a.m. to 4 p.m.