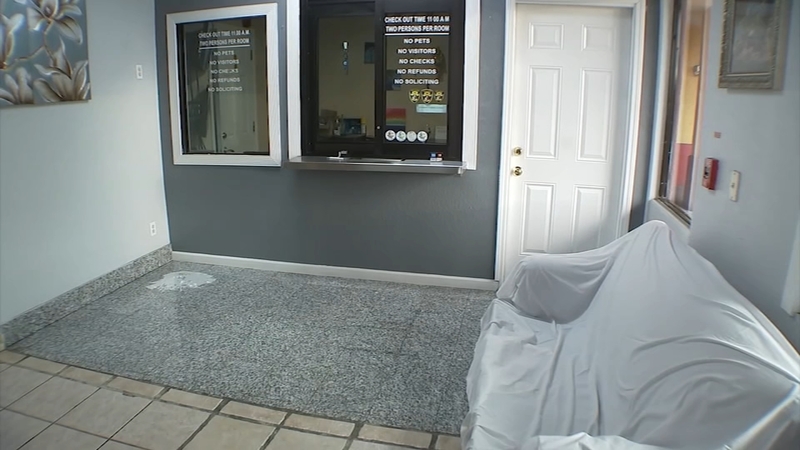 Sideharth Gandhi, manager at the Taj Inn & Suites, talked to ABC13 Tuesday, the day after Rios, a 25-year veteran of the Houston Police Department, died.

Rios was killed in the 7900 block of the North Freeway after police say he engaged a suspect in a gun battle. After he was shot multiple times, Rios ran into the motel looking for help and collapsed. He was declared dead at the scene.

Gandhi said he was in the back office when he heard four shots, followed by a door opening and Rios yelling for help. Gandhi said Rios was covered in blood. The manager told ABC13 he didn't know at the time Rios was an officer since he was in plain clothes and that Rios never identified himself as such.

Surveillance video, according to Gandhi, shows Rios stumbling into the motel and asking for help, but it never captured the vehicles connected to the shooting.

FIRST LOOK: inside the Taj Inn & Suites, where Sgt. Sean Rios collapsed (right here in the lobby), begging for help after being shot. Manager tells me he heard 4 shots, heard Rios come in, and called 911. #abc13 pic.twitter.com/ih3Z878yUe

"He was just bleeding everywhere, all over, and just not running right. He entered the office at the motel and he collapsed right in there," a witness said Monday.

About 24 hours after Rios died, police announced the arrest after 24-year-old Roberto Soliz. They are also looking for a person of interest in the case.

"We are going to catch you," Acevedo said on Monday. "Do yourself a favor and turn yourself in."

Acevedo added that Rios was headed to the airport for his 2 p.m. shift when he was involved in the shootout. Rios leaves behind four children.