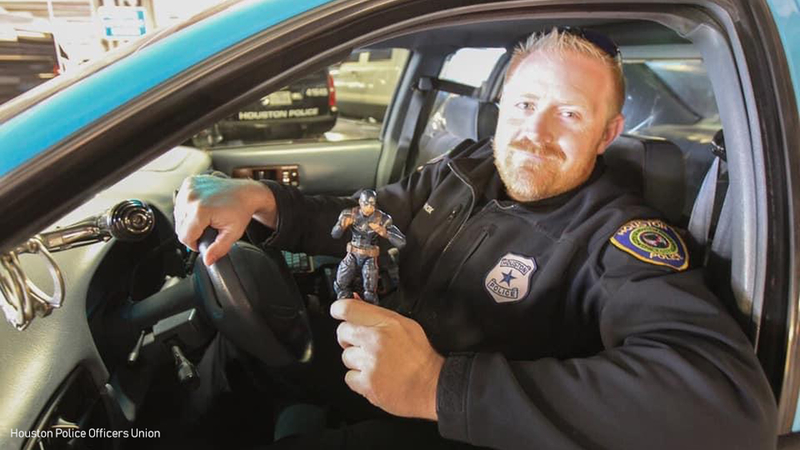 HOUSTON, Texas (KTRK) -- Jason Knox is being remembered as a loving father and husband.

"The City of Houston is heartbroken following the tragic death of HPD Officer Jason Knox. He was a dedicated public servant who inspired his fellow officers and worked to build meaningful relationships throughout the community," Houston Mayor Sylvester Turner said.

Houston Police Chief Art Acevedo was overcome with emotion as he talked about the loss of Knox, who was a Tactical Flight Officer on board the HPD helicopter that crashed Saturday.
Knox joined HPD in 2012 after serving for six years as a Harris County deputy constable, according to Houston Police Officers' Union records. He was assigned to the Midwest Patrol Division and the Office of Public Affairs before joining the Air & Marine Division in January 2019.

May he Rest In Eternal Peace and may he soar in Heaven.

Jason will be missed but we will carry him in our hearts and in our memories. We will forge ahead as a department & as an Air Unit, because Jason would demand it of us. When knocked down this man always got back up.

Knox was married with young children- a boy and a girl. His father is Houston City Council Member Mike Knox, a former Houston Police officer.

The council member released a statement on the death of his son:

"My wife, Helen, and I and Jason's wife, Keira, are deeply grateful for the outpouring of love and support from our Houston community. We celebrate all Jason embodied as a committed HPD officer and pilot who fully embraced his job and we celebrate Jason as he was outside of his work - a devoted husband, a loving father and our only son whom we cherished every day. Where there is great love, there is great loss. We love Jason with all of our hearts, as we always have, and we will keep all that he is alive for his children. As believers, we know Jason is in the loving arms of Jesus Christ, our Lord and Savior. We appreciate the privacy you have given us and continue to provide as we walk this road we would never wish for anyone, but that we now accept as ours."

Knox was known for his love of vintage cars and was instrumental in restoring classic Houston Police cruisers.


The @houstonpolice officer who passed away this morning was Jason Knox, son of CM Mike Knox.

My thoughts, condolences, and prayers are with CM Knox, Officer Jason’s wife, and their family at this time.

I ask our city to pray, uplift, and bring comfort to them during this time.