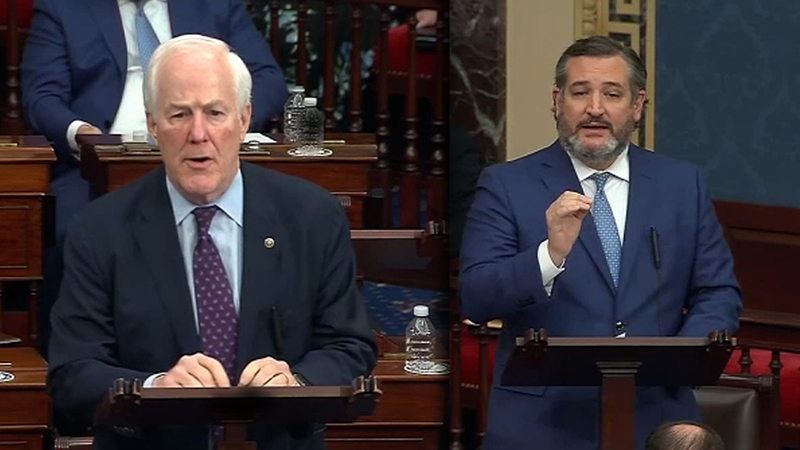 WASHINGTON (KTRK) -- While the Senate narrowly passed the $1.9 trillion COVID-19 relief bill Saturday, Texas' two senators joined their Republican party colleagues in voting against the measure, calling it a waste.

"This bill is stuffed with pork, with only nine percent of the almost $2 trillion going toward actual and urgent COVID relief," said Sen. Ted Cruz in a statement. "Instead of working in a bipartisan manner to open our schools, bring back small businesses, and help struggling Americans get back on their feet, Democrats chose to pander to their radical liberal base with partisan handouts."

Sen. John Cornyn pointed to last year's relief efforts as a moment of unity and said that was missing this time around.

"We could have built on that record this year, but instead Democrats put together a package of unrelated, wasteful, and downright partisan priorities: a blank check for mismanaged union pension funds; funding for climate justice; backdoor money for Planned Parenthood; an exclusive paid leave program for bureaucrats; and the list goes on," Cornyn said in a statement.

Last week, Cornyn described funding to operate and maintain the Seaway International Bridge over the St. Lawrence River in upstate New York as part of an "unrelated liberal wish list." But Majority Leader Chuck Schumer said on the Senate floor that the request for funding for the bridge did not come from him and, in fact, had come from the Trump administration five months ago. He said revenues needed to maintain the bridge had collapsed with no one using the bridge due to the pandemic.

"I learned about it being in the bill when I read about in in the newspaper," Schumer said.

The coronavirus bill has hundreds of billions of dollars for schools and colleges, COVID-19 vaccines and testing, mass transit systems, renters and small businesses. It also has money for child care, tax breaks for families with children and assistance for states willing to expand Medicaid coverage for low-income residents.

The 50-49 party-line vote sets up the bill for consideration before the U.S. House next week.