KTRK
By Ted Oberg
HOUSTON, Texas (KTRK) -- The latest round in the long running Prop B pay battle between Houston firefighters and city hall has a $4,000 price tag for dozens of former firefighters.

Months ago, in the midst of a mid-summer city council meeting, Mayor Sylvester Turner warned this day would come and now it's here. Retiring and resigning firefighters paying a big price to leave the department.

The City of Houston is clawing back back pay paid to firefighters after a judge declared Prop B the law.

Since then, an appeals court judge declared Prop B unconstitutional and the city wants that back pay back.

"We're being sensitive, but we cannot give a $17 million gift," Mayor Turner told Houston council members on June 12, 2019. That day, Turner said there was no current plan to claw the money back, but those who left the city would have to. In the last several weeks, the city started deducting the money from retiring and resigning firefighters' final checks. Firefighters say they had no warning.

After fighting through a year-long battle with cancer and other health issues, 33-year Houston Fire veteran Gary Kennedy decided it was time to retire.

"It was just time, you know, with the body wearing out," Kennedy told 13 Investigates. He and his wife were planning a motor home trip to start their new post-Houston Fire Department life.

Houston firefighters can bank some sick time and unused vacation days every year over their career. Those hours are paid out when they leave the department. Kennedy expected thousands of dollars, but weeks after his retirement, it never came, so he tracked down city payroll.

"They called me back finally after numerous calls and told me my money was being seized in order to pay back to Prop B money," Kennedy told 13 Investigates' Ted Oberg recently. "I never even got a notice that this day was coming."

RELATED: Prop B: Court sends city and firefighters back to mediation before considering case

Mayor Turner's office tells 13 Investigates the city has taken the money back from 47 firefighters who have recently left the city. In all, it totals $226,532. The first payment was deducted from a final paycheck in mid-August. 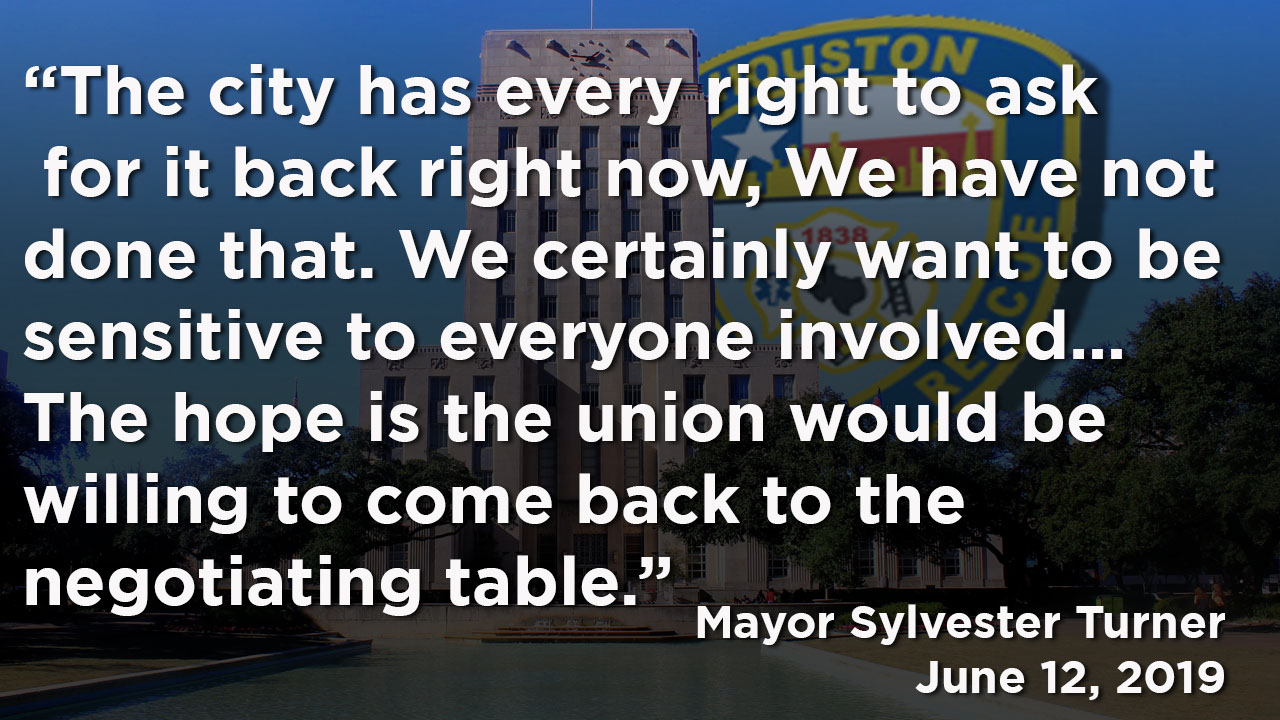 Felipe Baquero left Houston for a small city in Indiana. The city clawed back his $4,000 Prop B payment too. Baquero told us the City of Houston didn't even tell him the money would be taken until 90 days after he left the city.

Former Houston firefighter Adam Lopez heard rumors the city was going to take the money out, which is why he says he asked a Houston Human Resources staffer, "'Are you taking Prop B money out?' She said, 'No.'"

When he got his final check, it was at least $4,000 short of what he was expecting.

Lopez, who now works at another district in the Houston suburbs, says he felt like he was punished twice. "We felt so mistreated (for the last year at HFD) and now this."

Former Houston firefighter Coy Carleton, who also had no notice the money would be taken, went one step further suggesting, "The only reason (Mayor Turner) paid it in the first place was so he could take it back."

Turner, possibly anticipating the criticism months ago, told reporters, "People say I am being vindictive and yet you cannot just give away taxpayer dollars to anyone. You just can't do it."

Carleton was told he didn't have enough money in his saved time bank and owed the city an additional $800. The city hasn't tried to collect yet.

Kennedy was told he owes the city $900 more. He has not been sent a collections letter yet. He has a warning for active-duty firefighters: "Start watching your paychecks because they're going to be short. I'm sure they're going to come after you also."

The mayor's office tells us there is no current plan to recoup the cash from active-duty firefighters. Turner has said in the past he would like it to be part of future contract negotiations.

"The city has every right to ask for it back right now," Turner said in June, "We have not done that. We certainly want to be sensitive to everyone involved...The hope is the union would be willing to come back to the negotiating table."

No contract talks are scheduled.

As for why a notice was not sent prior to the deductions, the mayor's office sent a notice firefighters sign when they are first hired and when they leave the city notifying them that any over-payments will be deducted from final paychecks. Neither document mentions the Prop B payments.

Have a tip for Ted Oberg? A problem to solve? Get in touch with us on our tip page, or send a tip below. (On mobile? You can open our form by tapping here.)
Related topics:
houstonted oberg investigateshoustonfirefighters
Copyright © 2020 KTRK-TV. All Rights Reserved.
TED OBERG INVESTIGATES

13 Investigates survey shows back to school in flux for millions