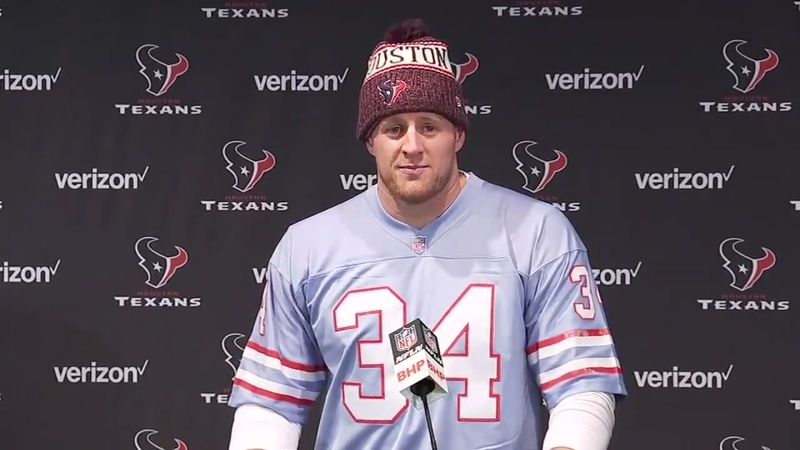 Postgame sound after the Texans take down the Browns

HOUSTON, Texas -- Deshaun Watson threw a touchdown pass and the Houston Texans intercepted rookie Baker Mayfield three times, returning one for a score, to extend their franchise-record winning streak to nine games with a 29-13 victory over the Cleveland Browns on Sunday.

Houston raced out to a 23-0 halftime lead and added two second-half field goals by Ka'imi Fairbairn to give him five on Sunday.

REMEMBERING 41: Just one week after the passing of Texans owner Bob McNair, the team honored another one of Houston's icons.

He finished with 397 yards passing and had a touchdown pass in the fourth quarter after throwing a career-best four in a win over the Bengals last week. Houston's fearsome pass rush, led by J.J. Watt and Jadeveon Clowney didn't sack Mayfield, but they hurried and harassed him for much of the day.

Houston was up 3-0 after an early field goal when Watson, who finished with 224 yards, connected with rookie Jordan Thomas on an 11-yard touchdown pass. DeAndre Hopkins set up that score when he made a 24-yard reception after T.J. Carrie grabbed his dreadlocks in an attempt to slow him down two plays earlier.

Zach Cunningham made it 17-0 when he grabbed his first career interception and ran 38 yards for a touchdown in the second quarter. Officials first ruled him down at the 1, but the play was reviewed and changed to a touchdown.

Kareem Jackson was called for a 47-yard pass interference penalty on Cleveland's next drive to put the Browns at their 20. But Mayfield threw another interception two plays later and it was returned 18 yards by Johnathan Joseph.

Known as the Blue Crew Tailgaters horn-wearing superfan, Joe Banowsky was honored by the team with a touching memorial before Sunday's game.

Lamar Miller had 103 yards rushing for his second straight 100-yard game and fourth of the season and Hopkins had seven receptions for 91 yards.

Cleveland continued to struggle in late-season games, and the Browns fell to 9-39 in December and January games since 2008.

Nick Chubb got the Browns on the board in the third quarter when his 2-yard TD run cut the lead to 23-7 with about 9 1/2 minutes left. Rashard Higgins had a 17-yard touchdown reception in the fourth quarter, but the 2-point conversion failed to leave the Browns down 29-13.

Houston added another field goal after that before a mistake-filled possession by the Browns. First Mayfield threw what looked to be a 76-yard touchdown pass to rookie Antonio Callaway, but it was brought back because of a holding penalty by left tackle Greg Robinson.

Two plays later, Mayfield connected with Callaway again and he gained 71 yards before rookie Justin Reid chased him down from behind and knocked the ball out of his hands just before he would have scored. It bounced into the end zone where it was recovered by the Texans.
Report a correction or typo
Related topics:
sportshoustonnflhouston texanscleveland browns
Copyright © 2022 ESPN Internet Ventures. All rights reserved.
TOP STORIES
LIVE: 14 students, 1 teacher dead in TX school shooting, gov says
Weather Alert Day: A round of strong thunderstorms expected overnight
Primary runoff sets up mid-term contests for AG and Lt. Gov. positions
NOAA predicts above average hurricane season for 2022
Window washers rescued from Houston high-rise in downtown
HPD searching for suspect accused for killing teen this weekend
Missing Alvin ISD employee found safe after he was last seen May 19
Show More
Ready to cast your ballot? 50 primary races headed to runoffs
Hidalgo releasing data on gun-related homicides ahead of NRA meeting
Mickey Gilley's life to be celebrated at public memorial in Pasadena
It's grub time H-Town! Restaurant Weeks dates have been released
Texas' anti-censorship law awaits SCOTUS ruling
More TOP STORIES News