Texans anti-racist message at season opener: 'It takes all of us' 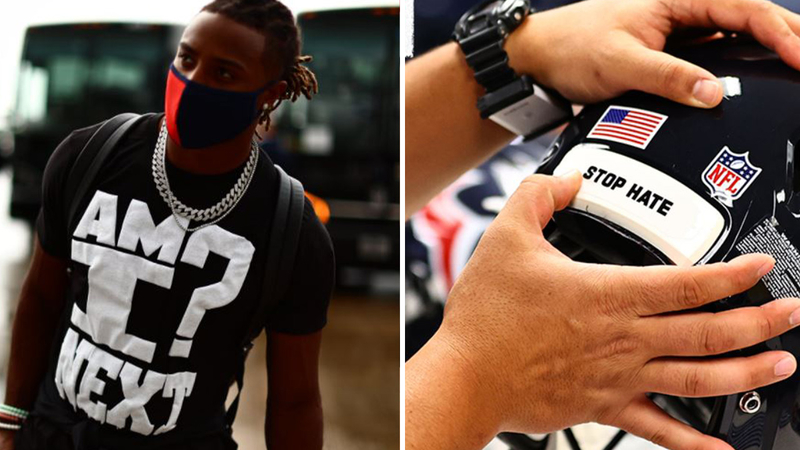 As players arrived in Kansas City, many were seen wearing T-shirts in support of the Black Lives Matter movement. This comes a week after the Texans called for change in support of the movement in a video posted to Twitter.

WATCH THE FULL VIDEO ABOVE

In the video, players talk about the cases of George Floyd, Breonna Taylor, Jacob Blake and police reform.

"No one should feel like the color of their skin increases the chances that the people who have been put in place to protect them may be the very ones who end up killing them," said wide receiver Kenny Stills in the video, who was arrested in July during a protest for Taylor.

Meanwhile, NFL end zones were inscribed with two slogans: "It Takes All Of Us" on one side, "End Racism" on the other. As part of its social justice awareness initiatives, the NFL also allowed similar visuals on helmets and caps.

Safety Justin Reid posted a photo of himself on Twitter wearing a black T-shirt with the words "Am I Next?" with the caption "The shirt speaks for itself."

The shirt speaks for itself 🤐 pic.twitter.com/82CkUutAa1

#Chiefs and #Texans players have been in talks about a joint demonstration before tonight’s NFL kickoff game that makes a statement on racial injustice and shows unity, per sources.

One possibility discussed: Both teams staying in the locker room during the national anthem.

The Texans are not the first home team to open up about the movement. The Houston Astros and Oakland Athletics recently jointly walked off the field following a moment of silence, draping a Black Lives Matter T-shirt across the home plate as they chose not to play on Friday night.