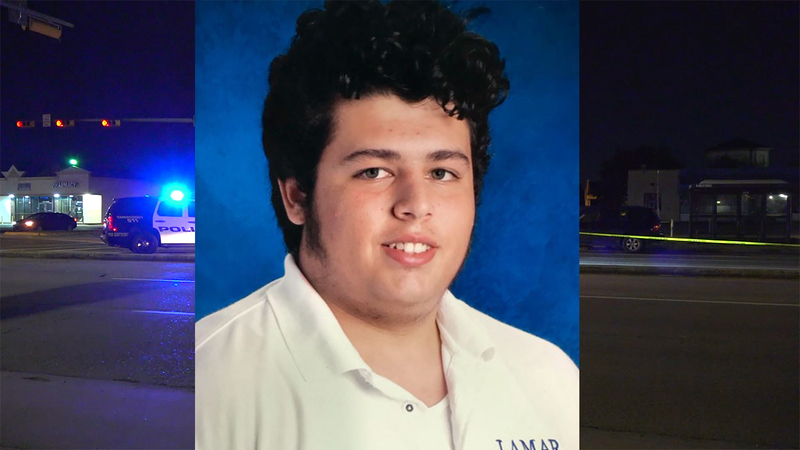 HOUSTON, Texas (KTRK) -- Houston police are searching for the suspect in connection with the road rage shooting of an 18-year-old, who has died of injuries.

The teen had been in critical condition since he was shot, but his mom, Angelica Halphen, told ABC13 on Tuesday that her son's "young body started to wear down."

Harrison Schmidt’s mom tells me her son has passed away. 😞 (See thread below). The suspect still hasn’t been caught. My original story: https://t.co/6uTLYTInec @abc13houston https://t.co/hLGEnRltMH

Halphen broke down in a news conference at the Houston Police Department headquarters last week.

"I am living every mother's nightmare," she said.

At around 7:30 p.m. on Halloween, her son, Harrison Schmidt, got into an altercation with a driver near the 12200 block of Fondren Road.

According to investigators, a gray or black four-door newer model Dodge Ram cut off Schmidt's black Toyota Highlander, then slammed on the brakes, which forced Schmidt to slam on his brakes. An argument ensued, and when Schmidt and his passenger pulled up to the stoplight at W. Airport and Fondren, so did the driver of the Dodge. When the light turned green, the suspect fired one shot into Schmidt's car, striking him in the head.

RELATED: 'There are lot of kids running:' 2 teens injured in shooting at high school football game

Schmidt fought for his life at Ben Taub Hospital, with the bullet lodged in his frontal lobe.

Halphen says Schmidt is an amicable kid, who never stayed out past 10:30 p.m. and enjoys activities with his family. He once went to St. Vincent's DePaul and Lamar and was set to graduate from a specialized academy in January.

The second part of his school day allowed him to work a mechanic's job, where co-workers describe him as fun-loving and always singing.

Police are urging the public in the Fondren area to remember what they saw Halloween night.

A sketch of the suspect has been released in hopes of bringing him to justice.

RELATED: Man shot in back during robbery near University of Houston

He's described as a white or Hispanic man in his 30's or 40's, with deep acne-like scars on his cheeks.

Schmidt's family has put up a $5,000 reward for information that can lead to an arrest.

"We need more than ever for people to come forward. I need justice for my son," said Halphen.

Schmidt would have turned 19 years old on Nov. 23.

If you know anything, call HPD or Crimestoppers at 713-222-TIPS. You can remain anonymous.