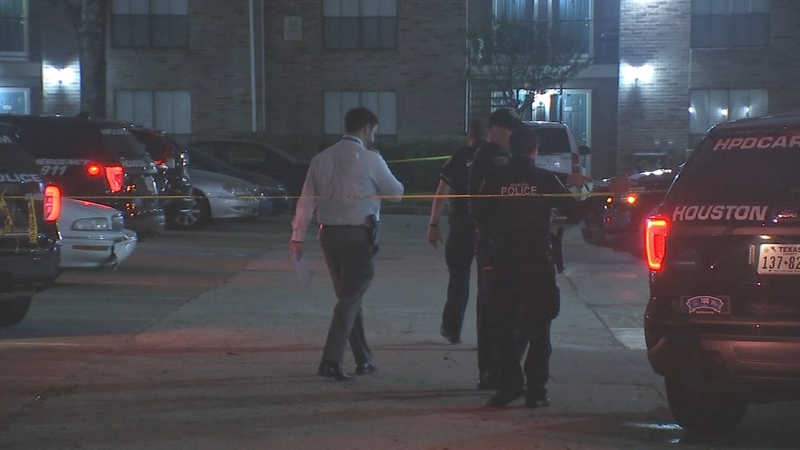 Another violent weekend across Houston

HOUSTON, Texas (KTRK) -- It's been another weekend of violent incidents across the city, with around a half-dozen shootings involving a death or injury.

In west Houston, a man was shot twice in the back in the 11400 block of Harwin Drive Saturday night while walking to a store, according to Houston police. It happened around 9 p.m. at Harwin and Boone Road. The man was taken to a hospital but was stable. There was no word on the shooter in that incident.

RELATED: Houston on pace for nearly 400 homicides this year

In northwest Houston, a man was found shot to death Saturday night in an apartment complex parking lot. It happened in the 8400 block of Willow Place Drive near Tomball Parkway around 7 p.m. Witnesses told officers they saw a man in a gold bomber jacket running away from the scene with a gun, according to Houston police. The victim was a Black man in his 20s.

Another man was shot during a robbery attempt in the 5200 block of S. Rice Avenue in a parking lot. There was no word on the man's condition or if an arrest had been made.

On Houston's south side, authorities were still working to find out who shot a man as he was driving early Saturday near Cullen Boulevard and Reed Road. The man was discovered in the driver's seat of a Jeep outside a Walgreen's around 6:15 a.m. He had been shot once in the head at close range, police said. Detectives were working to find the shooter on surveillance video at nearby businesses.

Two men who were shot in southeast Houston were found in Baytown early Sunday morning. The shooting happened around 12:15 a.m. in the 3100 block of Berkley Street. Houston police were looking for a person of interest in that incident. One of the men was found dead inside the pickup. The other victim was taken to a hospital and was expected to survive.

Houston could be on pace for nearly 400 homicides by the end of the year. It's a high the city hasn't seen since 1993, when there were 447 homicides and about 500,000 less people living in the city.

RELATED: 3 dead in 1 week of shootings across Houston and the killers are still on the loose

After a violent start to the week, Houston could be on pace for nearly 400 homicides by the end of the year. It's a high the city hasn't seen since 1993.