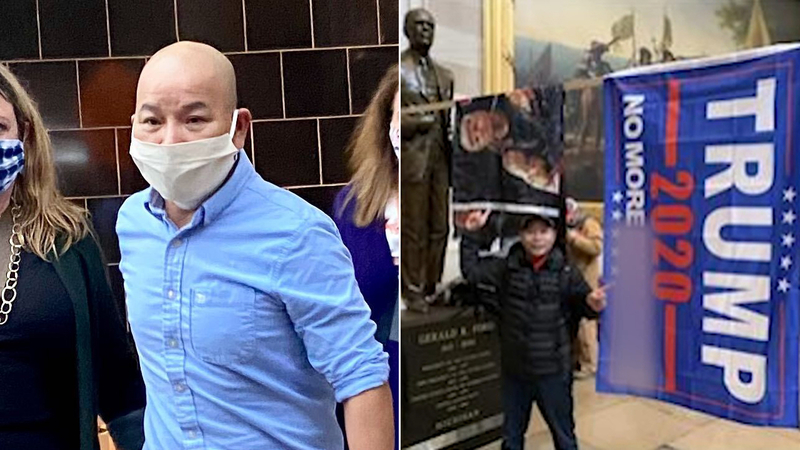 HOUSTON, Texas (KTRK) -- A former Houston police officer accused of unlawfully entering the U.S. Capitol as it was being ransacked by insurrectionists was released from federal detention Thursday afternoon..

On Thursday, Tam Pham made his first appearance in a federal court in downtown Houston on charges of trespassing and disorderly conduct in connection with the deadly riots on Jan. 6.

"He regrets being present at all, in Washington, D.C.," said Pham's attorney Nicole Deborde.

A judge also ordered Pham to surrender his passports.

Pham was taken into custody on Wednesday and, according to his lawyer, had to spend the night in holding due to closures in the midst of the inauguration.

After the proceedings, DeBorde said while her client isn't accused of anything violent related to the riots, the former officer is typically subdued and didn't want any of the attention that came of his involvement in the chaos in Washington.

"Mr. Pham doesn't want any of this attention. He's a very quiet, peaceable man," said DeBorde. "This has been a very distressing event for him."

DeBorde also reiterated Pham has been forthcoming and cooperative with the investigation. In an FBI affidavit, investigators stated he allowed them to examine his phone, where multiple photos and video of him inside the Capitol were located.

"Mr. Pham hasn't kept anything back from the government. The minute the government asked for information, he provided his phone. He provided answers to their questions. We weren't surprised to see the pictures," DeBorde said. "The real question was whether or not he was allowed to be where he was."

Pham is due to appear in U.S. District Court on Feb. 11. In the meantime, a Houston Police Department audit of Pham's past arrests is underway. Hours after Pham's arrest, Chief Art Acevedo said the review was ordered to make sure there were no irregularities.