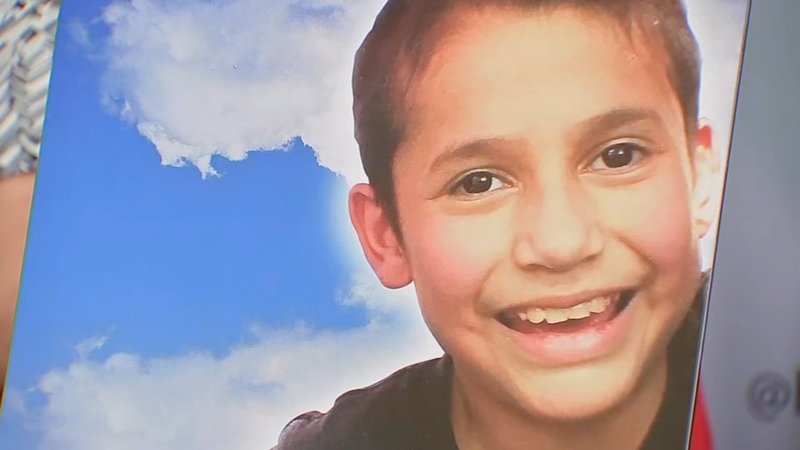 HOUSTON, Texas (KTRK) -- Richard Guerra's life changed three years ago when he heard a child's screams from outside his home on Fulton Street.

"He was saying 'Someone help me,'" he recalled. "I think about him every day."

The boy was 11-year-old Josue Flores, who was walking home after a science club party at Marshall Middle School. He had been stabbed, and Guerra said he saw the man who did it.

On the three-year anniversary of the boy's death, Houston Police Chief Art Acevedo stood with Josue's mother, Maria, and vowed to her that one day her son's killer would be brought to justice.

A person of interest, identified at the time as Andre Jackson, was arrested in connection with Josue's death. He was not charged because the district attorney at the time said the DNA evidence against him was inconclusive.

Jackson walked out of jail, maintaining his innocence. Acevedo said today he is still a person of interest in the case.

"We've sent clothing to a DNA lab in Utah, which has the latest technology," Acevedo said. "We hope it will build a case against the person who killed Josue."

Police say they want to speak with this man.

Video from a METRORail stop, which had been released at the time of the boy's death, was shown again Friday. Guerra looked at it, and said, "That's the same man I saw that day."

Acevedo believes there are still witnesses to the murder, or saw the man who did it, who have yet to come forward. "We need the public to help with this case. Anyone who can provide any information. There were people on the street. We need them to come forward."

Search for justice: A timeline of the Josue Flores murder case

HPD's cold case squad has been working the case, and hope that DNA will result in an arrest and a charge soon. Speaking to the suspect, "Who I know will see this," Acevedo said, "We'll find you, and it's better that you turn yourself in now."

Anyone with information on Josue Flores' murder can make an anonymous tip online or by calling Houston Crime Stoppers at 713-222-TIPS.

You may be eligible for a $5,000 reward if that information provides the break that the case needs.