SUNNYSIDE (KTRK) -- The Sunnyside neighborhood has seen its share of crime in recent years.

In January, a 95-year-old Army veteran who served in WWll, was beaten in her home during a robbery. She died last week from the physical and emotional trauma. Last month, a man was shot at a gas station on Cullen and Belfort. That shooting happened on a Sunday afternoon, and was recorded on security video.

No arrests have been made in either case, but it motivated those who live in and care about their community to mobilize and march down the streets.

It was a prayer walk, that included the mayor, the police chief, and a uniformed officer who borrowed a bull horn to say a prayer of his own. 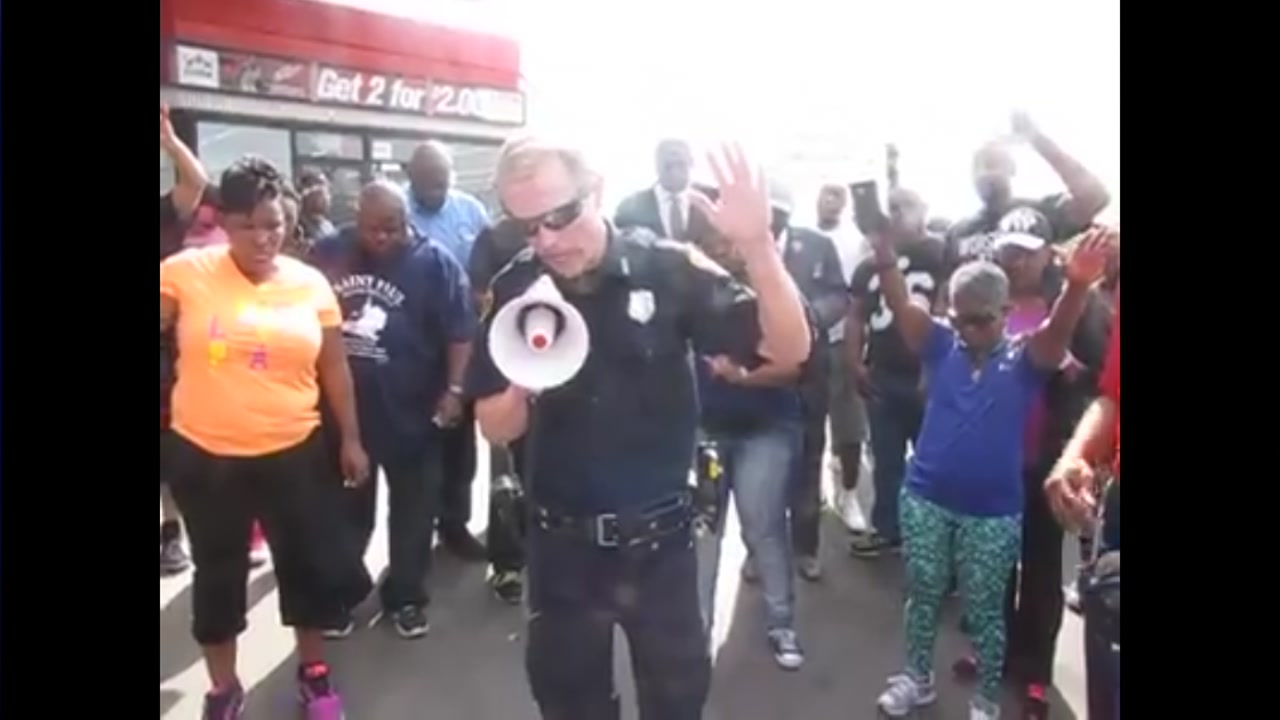 Senior HPD Officer Barry Curtis is a department liaison to clergy. Surrounded by a large crowd of people, at the same gas station where the shooting happened in February, he prayed for unity and protection over the area.

"We're here to protect and serve," Curtis said. "That's what our job is, and serving is not just going out and patrolling, but praying for the public as well."

The parking lot prayer was recorded by an onlooker, posted to Facebook where it has been viewed several thousand times.

"I didn't even know what 'viral video' was until today," said Curtis.

A ministry called "I Team 1 Fight" organized the prayer walk. Pastor Calvin Miller knows Curtis, but even he was surprised when the officer started leading the prayer session.

"The response was amazing," Miller said. "To see everyone holding hands, and the officer communicating and praying with us."

Barry Curtis sees this as his mission, and it's his job. As part of HPD Community Affairs, he's an outreach to neighborhoods. He's been at similar events in other communities.

"We take spiritual ownership of areas," he said. "And when we pray and ask for God's help, we see crime go down."

He plans to study before and after crime statistics to show the cause and effect.

Tacoma Lighten has an organization called Community Faith Restore. She was part of the Saturday prayer walk, and like others, was surprised to see a uniformed police officer walk and pray with them.

"It was not just to see a color or a badge or a uniform -- just everyone coming together to offer hope to one another," Lighten said.

Lighten is organizing a hip hop gospel event for Sunnyside, scheduled for August. Information can be found on the Community Faith Restore Facebook page.

"I hope it changes minds," Curtis added. "It's like out of the Book of Nehemiah. We're the ones with the weapons, the people here are the ones with the tools, and the desire to improve their community. And when we team together, it makes a great partnership."