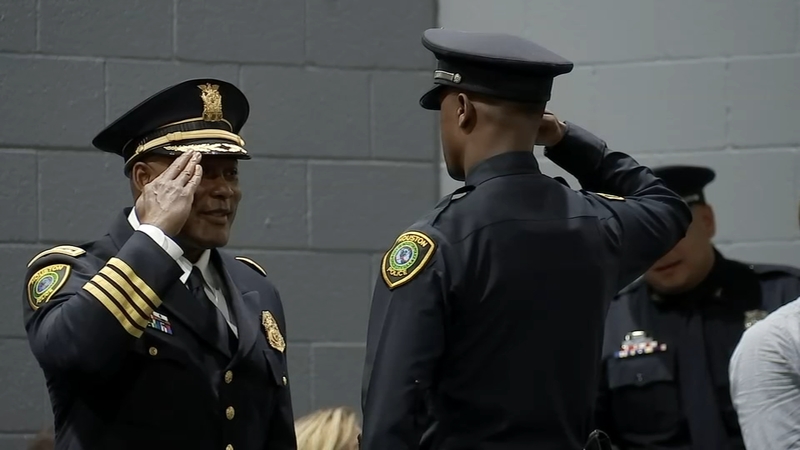 HPD welcomes 61 officers as city deals with rise in crime

HOUSTON, Texas (KTRK) -- On Thursday, the first of five Houston police cadet classes for the 2022 budget year were sworn in. A total of 61 men and women took the oath to protect and serve our community. This comes at a time where it is a challenge to grow the police force, as crime is on the rise.

"I just know that the more efforts we put to the community, things will start to change and over the years, we will start to see a change," said Wanye Haynes, a proud member of HPD cadet class #252.

Haynes, from Long Island, New York is now fulfilling his dream of becoming a police officer. His mother, Yolanda, is prayerful for his protection as he will work to protect the community.

"We put God first and just know that he is going to be covered and do well," said Yolanda.

David Johnson, the class president of HPD class #252, said he loves to help others and feels joining the force was the right move for him.

"I just feel like the community needs more people. This is a time where a lot of people don't want to be police officers," said Johnson.

Johnson admits the rise in crime makes him a bit nervous but said his training has prepared him.

"They've been real with us. They haven't sugar-coated anything. They've been pretty honest with us on what we are getting ourselves into," said Johnson.

These men and women are signing up to serve as the homicide rate is up 24% in Houston over this time last year.

The challenge to get more officers to join the department is clear. With the cadets of class #252 now on the force, there are eight more police officers than this time in 2021.

"Some six-plus years ago, in January of 2016, there were 1,900 police officers that were eligible to retire out of roughly 5,100," explained Mayor Turner.

Turner said officers retiring is part of the problem that cannot be solved overnight. After the graduation ceremony, Turner announced a proposed pay raise for officers.

"Not only are we adding more police, not only are we utilizing more technology, but we are also making a commitment to their pay," said Turner.

Specifically, the proposed pay raise would give officers a 10.5% pay raise over three years and provide $6.7 million in special pay.

The city and the Houston Police Officer's Union have been in negotiations for months and have finally reached an agreement.

"This contract I think is fair to us and fair to the city. I think at the end of the day it is going to help our officers feel appreciated. That's what we really need here. The morale is obviously low with things going on around this country, but we are building it up," said Doug Griffith, HPOU President.

The proposed pay raise will soon go before the city council for their review and approval.