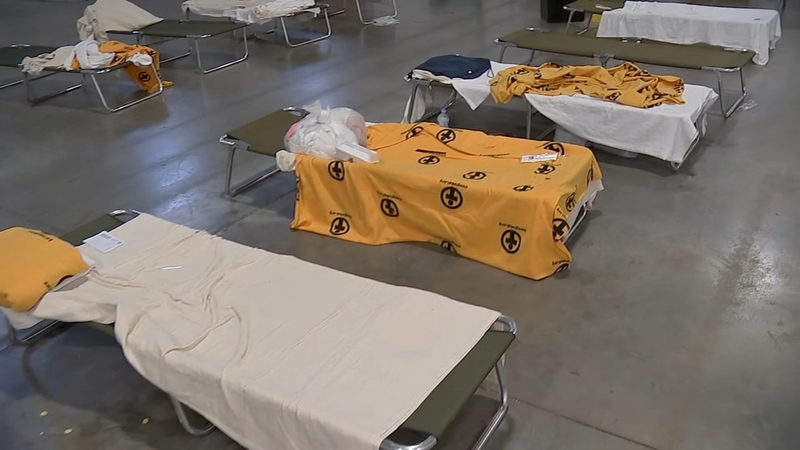 HOUSTON, Texas (KTRK) -- ABC13 was given exclusive access inside the suddenly shuttered shelter for migrant girls in northeast Houston.

On Monday afternoon, the National Association of Christian Churches (NACC) opened up its emergency shelter so we could take a look at the facility that housed 500 unaccompanied migrant girls until this weekend.

The giant warehouse was divided up with pallets of boxes. Green cots bearing FEMA and Red Cross logos are lined up row after row. Left on some of the cots are coloring pages, a pillow with names handwritten on them, and personal belongings stuffed underneath.

A handwritten sign denoted the medical tent. There were also cubicles where the girls made zoom calls to connect with sponsors. Donated clothing and medical supplies that would never be used were stacked up throughout the warehouse.

"I believe there is no doubt that this facility or any other is not ideal for kids," said NACC attorney Dean Hoover, who spoke to ABC13 via Zoom. "I believe this was more emergency-like than some other, longer-standing facilities."

Hoover says NACC did not push to get the contract for the temporary housing. Rather, that the Housing and Human Services Secretary contacted the agency directly, asking NACC to get involved.

"Translating those wishes into practical care is difficult," said Hoover, "I don't think anyone at NACC would say the condition is ideal, but they're trying to make the situation as best as they could."

But FIEL, the immigrant rights group, has been critical of the setup since the beginning.

Hoover said the facility was never meant to offer dorm-style housing, like the permanent shelters run by for-profit agencies. He adds NACC were acting as "Good Samaritans" and were vilified for their efforts.

For example, there were a number of bathrooms on-site, however, the allegations that girls were forced to use plastic bags got widespread attention. Hoover said he looked into that allegation and it did happen once - when it was after lights out. He said the incident involved a federal employee and not a NACC staff member and was reprimanded.

Espinosa said for FIEL, the disagreements over whether the facility was adequate or not is beside the point. This clearly illustrates, in his opinion, that the federal government needs to move faster to reunify unaccompanied minors with relatives or sponsors.

"We would like a better job to be done to work on reunifying these people," he said, "So fight their cases in court, not in detention."

Hoover said the entire episode has caused such stress on Father Ortega, NACC's founder, that he is currently in the hospital.

Staff at NACC said, for now, they will keep many parts of the temporary shelter intact just in case they are called upon again to help at the last minute.